Deal or No Deal Game Rules To try to make the best deal possible by either keeping the briefcase that you first choose or by getting an offer from your host/banker that's worth even more.

One person is the host/banker and the other player is the contestant. After the game is over, players can switch roles and see who ended up with the better deal.

Attach a cover on each of the dollar values on the money board. Put the stand into the back of the money board and put all of the covers in the open position.

The host turns the value cards face down and mixes them. Without looking, he or she places one value card in each of the 26 briefcases.

Place the briefcases, number side up, in order in rows so that the contestant can see them.

The contestant calls out the number of one of the briefcases. That briefcase is placed near them but is not opened until the end of the game.

The contestant will call out the numbers of 6 briefcases for the host to open. These are opened one at a time and the cover next to the corresponding value on the money board is closed after each briefcase is opened.

The host now makes a money offer to the contestant to buy their briefcase, thereby stopping the game.

There is no set formula for determining the amount of an offer and there are many factors that will affect whether or not a player will take an offer.

The fun of being a host is trying to persuade your contestant to take the smallest amount possible (to a maximum of $1,000,000). However, you may like to use this quick method to get a rough idea of an offer amount and then add or subtract whatever you think.

Add up the total value remaining on the scoreboard and roughly divide it by the number of unopened briefcases. For example: if there is a total of $120,000 on the board and 11 cases to open, then you would roughly divide $120,000 by 11, giving you, as a guide, an offer amount of about $11,000.

If the contestant does not take the offer then, in Round 2, they open 5 cases and the game continues as above. The chart "Paying for Guesses" shows how many briefcases are opened in each round of the game.

The contestant has the option at the end of the game to keep their briefcase or trade for the one other case that is left. That briefcase is then opened for both players to see.

Players can now switch roles and play another game. The player who ends up with the most money wins.

All players must hold onto their $1,000,000 bill until it's their turn to be host. That way they will have enough money to pay off any deal they make with their contestants.

The Kitty: Take $5,000 from the BANK and place it in the center of the play area - this is the KITTY. All other money stays in the BANK to be used during play as required.

Value/Money Cards and Briefcases: Shuffle and place a value card into each briefcase as described above. The host deals out briefcases randomly to other players-not the contestant-in equal amounts. These Case Holders can now arrange the cases in front of them in neat rows.

Note: If there are 3 or 4 case holders in the game, the cases will not divide evenly. Place the two remaining cases in the center of the play area where the contestant can also select them during the game.

If a contestant selects one of these the host will open it (nobody guesses the contents on these). It is possible for the host to win from these center cases if the $0.01 value card is there. Simply follow the directions on the card: "Host wins kitty".

The contestant starts by choosing their special briefcase.


Selecting a Briefcase and Guessing

In Round 1 the contestant will open a total of 6 briefcases, one at a time. So, to start, they make their selection by calling out the number on the briefcase they want.

If this briefcase is 'held' by a case holder, the case holder now guesses the value that's inside this case. They can either have aFREE GUESS or a PAID GUESS. If they take a free guess and get it correct, they win $5,000 from the bank.

If they pay for a guess and get it correct, they win the value inside the briefcase from the bank. The price of a paid guess increases with each round (see "Paying for Guesses Chart" below) but, remember, a player can choose to never take a paid guess. Money that's spent on paid guesses, correct or incorrect, is added to the kitty.

The price that a case holder must pay for a guess starts at $5,000 and increases during the start of each round.

In Round 10 the contestant keeps their case or trades it for the one that's left.

The Value Card of the selected briefcase is revealed and the cover for that value is closed on the money board (whether or not the value was correctly guessed by the case holder).

The contestant then chooses another briefcase, the case holder guesses, and that value is covered on the money board.

If the contestant takes the offer, the host pays them the offer amount from his/her own money. The host can now pay to guess the amount of the contestant's special briefcase. The host must pay the guess price for the round just played; they cannot have a free guess.

If they guess correctly they win the amount shown on the value card from the bank.

The next host and contestant now set up to play the game as described above.

If the contestant does not take the offer, they proceed to the next round of choosing briefcases. When they have chosen all the cases for this round, the host again makes an offer. This play continues for 9 rounds or until an offer is taken.

If the contestant goes all the way to Round 10 there will be 2 briefcases remaining - one with a case hold- er (or in the center of the play area) and the contestant's special case. At this point the host makes one final money offer.

The next host and contestant now set up their game and play repeats.

If the contestant does take the final offer, then the case holder who holds the final briefcase does not get to guess what is inside their case.

There are two ways to win the kitty:

If either of the "win kitty" cards are chosen and the kitty is empty (because a player has recently won it), no money is won.

If thereis no money in the kitty when a new host begins their game, $5,000 from the bank is taken to re-start the kitty. Otherwise the kitty remains empty until players pay for guesses.

From time to time you may wish to pause and have all players add up how much money they have to see who is winning. This can certainly affect people's decisions as the game gets closer to the end.

Agood host can easily keep track of how many briefcases have been opened by neatly stacking them in piles of 6, then 5, 4, 3 ... and so on. The host can also assist the contestant by making regular announcements like "Okay, 3 more to open".

So, until they have been host, a player has $125,000 (plus any money they win from guessing or the kitty) to spend on guesses. See, 'About the offer' on the back page. The offer money is paid from the host's own money.

See 2 Player version for help in calculating how much to offer the contestant.

A host and contestant are also able to negotiate or bargain with one another to arrive at an offer. For instance, let's say the host offers $30,000. The contestant may say, "I'd take $45,000".

Deal or No Deal 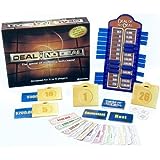 Deal Or No Deal in a Tin Box 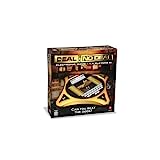 Deal Or No Deal Electronic