This game is like shuffleboard in the round. Players take turns flicking disks on a board, trying to score points by attaining central regions. The main stipulation being that contact with the other teams' pieces must be made in order for the disk to remain on the board afterward.

Although the game uses quite a bit of skill to flick the disks, there's a very significant strategy element to the game. There are many different variants and rules, as this game is very old and has had many different incarnations over the years.

Crokinole is most commonly played by two players, or by four players in teams of two, with partners sitting across the board from each other. Shooting is usu- ally done by flicking the disc with finger, though (rarely) small cue sticks, like those that would be used for billiards may be used.

The earliest known crokinole board was made by craftsman, Eckhardt Wettlaufer in 1876 in Perth County, Ontario, Canada. Several other home- made boards of southwestern Ontario origin, and dating from the 1870s have been discovered within the past 10 years.

Crokinole is often believed to be of Mennonite or Amish origins, but there is no factual data to support such a claim. The reason for this misconception may be due to its popularity in Mennonite and Amish sects.

The game was viewed as a rather innocuous pastime - unlike the perception that diversions such as card playing or dancing were 'works of the Devil' as held by many 19th century Protestant groups.

The oldest roots of crokinole from the 1860s suggest the British and South Asian games are the most likely antecedents of what became crokinole. Crokinole is an action board game similar to carrom, marbles, shove ha'penny or squails with elements of shuffle- board and curling reduced to table-top size.

Players take turns shooting discs across the circular playing surface, trying to have their discs land in the higher-scoring regions of the board, while also attempting to knock away opposing discs.

Board dimensions vary with a playing surface typically of polished wood or laminate approximately 27 inches in diameter. The arrangement is 3 concentric rings worth 5, 10, and 15 points as you move in from the outside. There is a shallow 20 point hole at the center. The inner 15 point ring is guarded with 8 small bumpers or posts. â€¦ 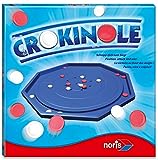 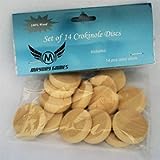 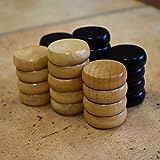 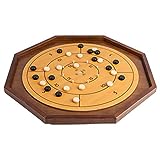 How to Play Crokinole

Mayday Games Crokinole Board 2017 Unboxing by Ones Upon a Game