Howdy pardner! The name's Buster. Stick with me and I'll take you from an unsalted greenhorn to a sourdough miner, lickety-split!

Now that you've shucked off the lid, let's rake and scrape these cowchips to set the table, real purdy-like.

Place the Buster deck and Buster Pioneer near the board. Place 3 gunmen at the Shootout from a player color you are not using. They stay there for the rest of the game and are taken into account when the Shootout is resolved.

Place all Bucks, Horses, Outlaws, River tiles, and the rest of the Barrels (face-down) near the board. They will form the general supply.

A game of Coloma consists of three Rounds. Each Round in Coloma is divided into five Chapters and each Chapter consists of multiple actions that players can take on their turns.

During a Chapter each player will secretly select a Site on the board, with the intention of performing that Site's listed actions.

However, if too many players choose the same Site, they will "Bust" and perform fewer Site actions! Once all actions have been resolved, the Barker tile is rotated clockwise, changing the available actions for the next chapter. Then the players repeat the Site selection and resolution process.


1. Reset and rotate the barker and bust tiles

At the beginning of each Chapter, return the tiles on the wheel to their default arrangement, with the Bust tile covering the Signpost. Then rotate both tiles clockwise to the next Site. Skip this step on the first chapter of the first round.

Each time the Barker is rotated to the next Site, it triggers that Site's Event, causing all players to immediately gain the indicated reward. See Events.

All players secretly choose a Site number with their dials.


4. Place pioneers on the selected sites

After all players have secretly selected a Site, they simultaneously reveal their dials and place their Pioneers on the corresponding Sites.

Each Site has two sections containing action icons, an outer Common section, and an inner Boom section. The players resolve one or two actions on the Site where they placed their Pioneers, based on if they had a Boom or a Bust.

After players have placed their Pioneers, they take turns resolving the Sites, starting with Site 1 and continuing clockwise in numerical order. Note: If a Site contains no Pioneers, it is skipped.

When the Site containing your Pioneer is being resolved, you will take your turn (minding player order if the site contains other player's Pioneers). The player who has the Sheriff Badge is the first player, and player order continues clockwise around the table from them.

On your turn, you may take the Site's Common and Boom actions (if available), in either order you choose. Note: You may choose not to take an action.

After all, turns have been completed, players remove their Pioneers from the board and return them to their play areas.

Note on the game flow: In many cases, players can perform their actions simultaneously-granted their actions do not affect each other.

Site 2: Survey the River and Build a Bridge

Common, Hammer action: Survey a River or build a Bridge.

To survey a River or build a Bridge you must pay the Common (Hammer) cost indicated on the main board by returning the required amount of Bucks and Gold to the general supply while Dudes are returned to your personal reserve.

Note: Spent Gold is not returned to the gold supply on the board! Instead, it is kept near the general supply of Bucks.

When survey a River, take a River tile from the supply on the mainboard and place it face-up above your player board on a vacant River column of your choice.

Then immediately score the Victory Points and gain the benefit indicated below the newly built River tile on your player board. Note: If the main board's supply of River tiles becomes low, simply refill it from the general supply. River tiles are not limited.

A Bridge cannot be built unless you have a River tile below it. Note: If the Bridges run out, there are no more: first come, first serve.

Bridges do not score Victory Points or give you any other benefits during the game; however, they can score you Victory Points at the end of the game if you meet their requirements.

You may only activate the Town Building abilities on your turn if you place your Pioneer onto a specific Site.

Each Town Building has a number matching the Site where it can be activated by having your Pioneer there. Town Building abilities have icons that show which actions must be available on the Site to enable them.

Some abilities require you to Bust on a certain Site in order to be activate them.

During your turn you can take the actions on the Site and use abilities on your Town Buildings in any order you choose.

Note: You can also choose to forfeit the action on the Site and just use the matching abilities on your Town Buildings.

Important: You cannot activate a Town Building in the same turn you built them.

Milling Victory Points: If you have need to draw cards from your deck but cannot, instead gain 1 Victory Point for each card you were owed.

Discarding: There is no discard pile. Discarded cards are placed face-down onto the top or bottom of your deck, your choice.

Hotels in your Town Building tableau can score extra Victory Points at the end of the game. Each Hotel gains you 1 Victory Point per Dude remaining in your Lodge.

After the players reveal their dials and place their Pioneers, the Site with most Pioneers on it will Busts! When that happens, the Bust tile is moved to cover the Boom section of the affected Site, making it unavailable for the players on their turns.

Note: The Common section of the Site is never affected by the Bust and is always available.

Note: In the case when the Signpost is adjacent to the Bust (pointing at it) both Sites' Boom sections Bust.

When two or more Sites are tied for most Pioneers on them, the Bust tile stays covering the Signpost.

The rewards given at each Event are:

When the players have completed all five Chapters, the Round ends with a Shootout!

If the number of Gunmen is greater than number of Outlaws, the players win the Shootout and should then refer to the left hand chart for rewards and penalties.

If the number of Outlaws is equal to, or greater than the number of Gunmen, the players lose the Shootout, and refer to the right-hand chart for rewards and penalties.

Then each other player with at least one Gunman claims the third reward/penalty. Break ties in favor of the player who has Gunmen placed in the row nearest to the Outlaws.

Players without Gunmen at the Shootout take a penalty. When you take a penalty, place the number of Dudes indicated on the chart into your Graveyard.

Dudes placed are taken from your personal reserve (or Lodge if there are none in your reserve), and fill up your Graveyard beginning with the bottom row, and moving up a row when the current row is filled. Dudes in your Graveyard are considered dead, and therefore cannot be used again for the rest of the game.

Dead Dudes are scored at the end of the game.

After the Shootout is resolved, players return their Gunmen to their personal reserves and Outlaws to the general supply.

Refill the board's gold supply with the Gold Nuggets in the general supply, starting with the empty Gold Spaces in the lowest pool.

Advance the round marker to the next round and place a number of Outlaws at the Shootout as indicated on the round tracker.

Reset the rotating tiles to their original starting positions, with the Barker covering Site 1 and the Bust covering the Signpost.

Before players select the Site with their dials, draw 2 cards from the top of the Buster deck and place them face up near the board. These cards indicate the Sites where Buster won't go in this Chapter.

After players choose their Sites and place their Pioneers, reveal the next card from the top of the deck and place Buster on the Site indicated on the card. Resolve the Bust like in a normal 3 player game and continue taking your turns.

When both players' turns have been resolved, remove Buster from the board and shuffle the face-up cards back in the Buster deck. Repeat this for every Chapter.

Gold can be spent instead of Bucks at any point in the game.

The gold supply is divided into three gold pools valued at 1, 2 or 3 Bucks. The current value of Gold Nuggets is always equal to the value of the lowest gold pool with an empty gold space.

Example: If you build a Bridge that costs 4 Bucks with two Gold Nuggets valued at 3 Bucks each, you would not get 2 Bucks back from the general supply.

When you gain a Gold Nugget, take it from the gold supply on the board, not the general supply. Gold Nuggets are always taken from the top gold pool first. When the pool is exhausted, you then take Gold Nuggets from the next pool, and so on.

There are a limited number of Dudes, Horses and Camps. If an action instructs you to gain Dudes, Horses, or Camps from your personal reserve but there are none left, the remainder is lost.

The game ends after the third Shootout.


Subtract Victory Points for Dead Dudes in your Graveyard.

Each Dead Dude in your Graveyard brings you negative Victory Points according to the number printed on the Grave underneath him. Subtract these Victory Points from your final score.

The player with the most Victory Points is declared the winner! 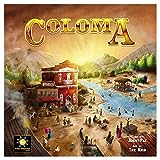