Be the first team (or player, in the case of three players) to earn 10 points.

Assemble the squeaky chicken by screwing the head onto the body (turn it clockwise, see fig. 1).

Place the squeaky chicken, die and sand timer in the center of the playing area.

Decide which color cards you want to play: blue or white (there is no difference in difficulty between the blue or white cards). Place card deck face down in the playing area.

Rules of Acting out Chicken Charades:

The Actor can use actions and point to objects in the room, but in whatever way the Actor chooses to get the word or phrase across, he/she must use the squeaky chicken as part of the action.

The only sound allowed in acting out any scenario is the squeak of the chicken - don't be afraid to use it! No words, grunts or other vocal utterances are allowed and can lead to disqualification.

Players may consult a dictionary for definitions, if needed.

Playing with 4 or More Players

The Actor's goal is to get his/her teammate(s) to correctly guess what word or phrase he/she is acting out.

When the Actor is ready to act out a charade, the opposing team turns the sand timer, and the Actor begins. His/her teammates have approximately 10 seconds to shout out words or phrases they think the Actor is acting out.

The opposing team should watch the sand timer and say "stop" when time is up. If the teammates guess correctly, the Actor announces that they are correct. The team gets to keep the card as one point.

If the Actor's team does not guess correctly within the time limit, the other team gets one try to guess the Actor's word or phrase.

The opposing team may consult for 10 seconds on their guess. If they guess correctly, they receive the card as one point.

If neither team guesses correctly, the card is placed in a discard pile.

The next player (someone from the other team) then becomes the Actor, and the game play repeats. Members of each team take turns being the Actor and repeat in the same sequence throughout the game.

In the three-player version of the game, all players play individually (not in teams). The rest of the game play is the same as for four or more players.

When the Actor is ready to act, one of the other players turns the sand timer, and the Actor begins. The other two players shout out words or phrases they think the Actor is acting out. The first player to guess correctly, within the time limit, gets to keep the card as one point.

If the word is not guessed within the time limit, the Actor keeps the card, but puts it in a separate stack from points won.

If the Actor forgets to use the chicken, the card for that charade also gets placed in this second stack. The cards in this stack count as negative points, and are subtracted from the positive points in the primary stack.

The first team (or player, in the case of three players) to earn 10 points is the winner. 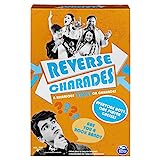 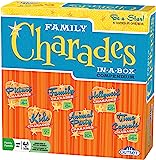 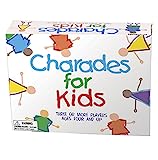