Cat'astrophes is a game where you play as a mischievous cat acting out on its chaotic instincts.

Despite your natural tendency to get into trouble, you'll need to be careful enough not to get caught red-pawed by your humans. Be careful: whoever is the best at getting off scot-free will win the game!

There are 3 types of cards: mischief, trick and cuddle.

Starting with the first player and moving clockwise, every player performs one of the following actions:

Once every player has performed an action, all cards are turned over simultaneously and resolved clockwise, starting with the first player..

N.B.: When the token lands on space 20 (threshold) of the mischief scale, punishment points are handed out and the token is moved back down to space 0 at the bottom of the scale.

Any additional mischief points make the token move up the scale starting from space 0.

At the end of the round, all the cards played are discarded and the first-player token moves to the next player clockwise. Then the round starts again!

There are two ways a game can end:

If this happens, the game ends at the end of the current round.

If the draw pile has run out of cards, the action "draw cards" is no longer available: don't shuffle the discarded cards.

At the end of the game, players get punishments points for every mischief and trick card still in their hand. They must move their token forward on the score tracker by the total amount of points from the cards in their hand. Cuddle cards still in your hand do not, however, make you lose punishment points.

After the final count, the player with the lowest punishment score as shown by the score tracker wins.

Apply the following rule to spice things up and make the game even sneakier players who cross a threshold not only get the corresponding amount of punishment points; they also get extra punishment points for each space over the threshold.

Example : Felix has a mischief card worth 2 points in front of him. The token on the mischief scale is on space 14. Felix will cross the threshold on square 15, which will earn him 2 punishment points.

However, since he lands 1 space above the threshold, he will get an extra punishment point. For a total of 3. Conversely, Jeremy plays a cuddle card worth 3 points and brings the mischief token back under the 15 threshold. He loses 2 punishment points and an extra 2 points. 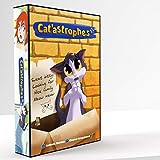 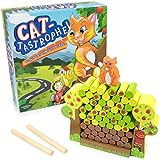