Surround with blocks to win, but do not leave them!

Players try to surround point blocks with their own color blocks in order to get the victory points. Players get penalties when they have penalty tokens or leave their own blocks at the end of the game.

The game continues until every player cannot place their blocks on board anymore. At game end, the player with the most victory points is the winner.

Then place point blocks as the pictures show. (You must place them exactly according to the description).

Penalty tokens for each player numbers

The starting player begins: players take turns in clockwise order around the board. A player, on his turn, places his first block anywhere on board.

(However, the placing area is limited by the boundary according to number of players).

From his second block, the blocks must be connected to the side of the previous block.

The player who surrounds a point block with the most number of blocks than others can get the point block. Around a point block, there are 12 spaces which can be placed by blocks.

When a player' s blocks occupy those spaces more than other players, he will get the point block at the end of the game.

As a result, the Blue player gets the point block.

Sometimes, a player cannot connect his blocks because his already-placed blocks are blocked by others' blocks. In this case, the player can use penalty tokens. By using them, he can place his new block on spaces that are separated from his previous blocks.

The yellow player can place his block by skipping 1 space like picture1.

In this case, he must take a -2 point penalty token to do this.

Example 2: If he skips 2 spaces like the picture 2, he must take two '-2 point' penalty tokens.

Like these, anyone skipping charges a '-2 point' penalty token. These minus tokens are deducted from total victory points at game end.

Also, if there is no more penalty tokens left during the game, any player in need cannot take them.

A player can say 'PASS' when he cannot place his block anymore. Then the next player continues the game. When all the players cannot place blocks on board, the game is over. Everyone counts their victory points.

If a player leaves any blocks at the game end, it is also deducted(-1 point per one square of each block).

The player who has the most victory points is the winner. 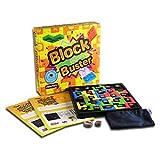