Rivaling sheep herds are battling it out to control the most space of Farmer Pat's pastures. Watch out for sneaky sheep and plan your moves carefully to advance your herd and fence out the foe. Conquer the most pastures to win this fast-moving strategy game. Remember, the grass is always greener for strategic sheep!

Move your sheep to claim the biggest portion of the playing field by blocking your opponents from moving in!

On your turn, you must:

Example: The black sheep stack can move to either:

1 one of the pastures on the perimeter of the field.

2 the pasture immediately in front of the blue sheep.

If your sheep stack is blocked on all sides by other sheep, then it is trapped and can no longer be moved.

You are out of the game when you can no longer move any of your sheep.

When all the players can no longer move any of their sheep, the player who occupies the most pastures wins!

in the case of a tie: If two or more players occupy the same number of pastures at the end of the game, the player with the largest herd of sheep (meaning the longest chain of sheep connected by at least one side) wins the game. 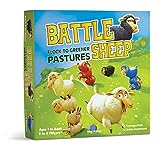