You are an air-shipwright: builder of flying machines used by the dreams to traverse the skies of the Oniverse! You have no equal when it comes to drafting the best blueprints, locating the finest construction materials, and recruiting the most experienced crews.

The Archonts have given you a weighty charge: to build a new fleet, more beautiful than any that has ever sailed the skies. You must complete this prestigious task before your resources are exhausted!

Aerion is a solo/cooperative game for one to two players. Your goal is to build six airships, each represented by a ship token. Each ship must be built using blueprints, materials, and crew that you must acquire each turn by rolling dice. To get the die results you need, you can reroll one or more of your dice. However, each reroll has a cost that brings you closer to losing the game!

You win the game by building the six ships before all the cards are discarded.

Six expansions are also included. Each expansion is independent from the others, and they can be freely combined. The base game and the expansion have identifying patterns at the bottom of the corresponding cards.

These rules describe setup and gameplay for the solo game, without expansions.

The six faceup cards form the Display. Leave room under the Display for four separate areas: two Workshops, one Pulpit and one Reserve.

There are two types of Resource cards: Element cards are used to build Ships, while Book cards provide beneficial effects to help you accomplish your goal.

There are three Elements needed to build each Ship: one Blueprint, one Material, and one Crew, shown on the Project side of each Ship token. Each of these Element cards shows its own icon in each of the top corners.

The bottom corners of each card show the icons of the other Element cards you can combine it with to build a Ship.

You place the Element cards you acquire in your Workshops as you work towards completing the Ships. Each Workshop can store up to three cards: one Blueprint, one Material, and one Crew.

Each Workshop can be used to build only one specific Ship at a time. When placing Element cards, the Blueprint and Material cards must be placed before the Crew card can be placed.

The Crew must be placed last. The Blueprint and Material cards can be placed in any order.

add an acquired Element card (not a Book card) to your Reserve if you cannot, or do not want to, place it in one of your Workshops.

During any phase, you can discard a Book card to take up to two discarded Element cards (not Book cards) from the same discard pile and place them on top of their original deck in any order.

Pixies can be used to modify your rolls. After rolling dice, you can spend a Pixie to change one die to the number of your choice. You can spend any number of Pixies during a single Phase 1: Roll. Return spent Pixies to the box.

Aerion is played over a series of turns, each consisting of three phases:

Roll the six dice. The top of each Resource card shows the roll needed to acquire it, such as two pair or four of a kind.

The object during Phase 1: Roll is to roll the result necessary to take a Resource card you need from the Display.

If there is a card in the Display that you can acquire with your roll, you can proceed to Phase 2: Acquire.

You can repeat this multiple times, as long as there are cards left in the Display. You can reroll any combination of dice each time you reroll. You must continue to discard cards until you can acquire a card, or until there is only one card remaining in the Display.

If there is only one card remaining in the Display, and you cannot or do not want to acquire it, discard that card and proceed directly to Phase 3: Replenish, skipping Phase 2: Acquire.

You now have two 2's and two 5's, so you continue to Phase 2: Acquire to acquire the Incubi crew card.

Do not reveal new cards to replace discarded ones. Cards in the Display are replaced only during Phase 3: Replenish.

Keep in mind that every time you discard a card to reroll, the number of cards available this turn decreases, and you move closer to defeat.

Choose and take one Resource card in the Display that you can acquire with your roll. Place that card based on the card type:


Some rolls allow you to choose between multiple cards in the Display. You can acquire only one card during a single Phase 2: Acquire.

Note that sets of results do not need do be different (for example, AA+BB could be two pairs of the same number), but the A+B+C+D+E result is a set of dice in numerical order, either from 1 to 5 or from 2 to 6.

For every deck without a card in the Display, reveal the top card of that deck and place it faceup in front of the deck to add that card to the Display. If there are no cards remaining in a deck, that deck remains empty for the rest of the game.

If you discard a Book card to retrieve cards from a discard pile, and that deck has no cards remaining, the retrieved cards form the corresponding deck.

If all six Ships are completed by flipping them to their Flying sides, you win the game! If all six Resource decks and the Display are empty, you lose the game.

For a more difficult game, return one, two, or three Pixies to the box during setup.

The two-player game follows the normal rules, with the following exceptions:

Players alternate taking turns and going through the three phases, as in the solo game.

Each player has one Pulpit, one Reserve and one Workshop. Both players also share a third common Workshop that they can both place cards in.

You cannot place cards into the other player's Workshop, Pulpit, or Reserve. Both players can place Element cards in the common Workshop, including cards from their Reserves.

In order to build a Ship in the common Workshop, the player who has the Ship token must add the Crew card to complete the Ship.

Each player must build their own three Ships. If a player would build a Ship and does not have the corresponding token, nothing happens: the Element cards are discarded but no Ship token is flipped. 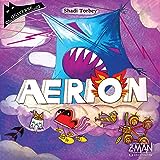