A War of Whispers Empires

Five mighty empires are at war for the world. Their banners flying boldly, they march towards glory. The ferocity of the Bear. The pride of the Lion. The endurance of the Horse. The reach of the Eagle. The power of the Elephant.

Come the dawn, the world will be remade, and one empire will rule over them all...

But it is in the shadows that true power lies... a Serpent, a Spider, a Raven, a Rat. This is not a war for the mighty, with battles waged on the open field, this is a war fought by empires unseen-a war of whispers.

Pale Raven endures. It is a wise ruler that would seek such sure counsel. The Pale Raven seeks no reward but that their knowledge survives and grows.

They walk the halls of unfeared and unloved. They are spiders power as lowly servants, heads down, hidden in high corners, spinning a web in service to no king or lord, but in service of the downtrodden and forgotten.

The Cult of the Rat

A mysterious new religion has arisen among the royal families of the Five Great Empires. The Cult of the Rat tempts the rich and powerful to join their feast, and ofcourse to contribute their worldly goods and influence.

The followers of the Endless Serpent encircle the globe. The Serpent often takes a more physical approach to coercion. The goals of the Serpent are many, and seemingly not all nefarious, but no outsider can make head or tails of them.

A War of Whispers: Deluxe Edition 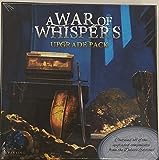 A War of Whispers Upgrade Pack