Zeus on the Loose Game Rules Be the first player to spell Z-E-U-S over several rounds by holding onto the Zeus figurine each time Mount Olympus reaches 100.

Zeus on the Loose is played in rounds, starting with the person whose first name is closest to Z.

On each turn, play one card from your hand face up onto a discard pile next to the draw pile (here forward referred to as "Mount Olympus").

If you play a Greek god, perform the action(s) written on the card and announce the new Mount Olympus total. Either way, end your turn by drawing the top draw pile card, bringing your hand back up to four cards.

Play continues to the left.

Grab and hold onto the Zeus figurine any time you play a card that:

Any time an opponent plays a number card on top of Mount Olympus that matches a number card in your hand, you may immediately play the match on top of the pile and steal Zeus. (For example, an 8 on top of an 8).

This is the only time you can play a card out of turn. Don't forget to announce the new Mount Olympus total. Play continues to your left, skipping over any player who should have had a turn before you. Note: You cannot play a matching number on top of a number card that you just played.

Note: If Mount Olympus is at a multiple of ten when you play this card, it stays at that number.

Skip the next player. Mount Olympus value stays the same. (In a two player game, simply take another turn).

Reverse Mount Olympus digits. For example, 37 becomes 73. Note: If Mount Olympus is between 1 and 9 when card is played, value becomes that number's multiple of 10.


Drawing Back up to Four Cards

Don't forget to draw back up to four cards at the end of every turn or else you must play the rest of that round short of a full hand.

In other words, if you only have three cards when the next player takes a turn, you must continue to play with three cards instead of four. If you forget to draw again after another turn, you're down to only two cards in your hand, so be careful!

A round may end in one of four ways:

Whoever wins the round gets the first letter of the word Zeus. (Keep track of scores on a piece of paper if helpful). The winner then collects all the cards, shuffles and deals a new round. The player to the left of the dealer starts the next round.

Play rounds until someone completes spelling Zeus. That player wins the game.

Eliminate the "Same Number Sneak" rule as well as enforcing penalty for not drawing back up to four cards.

Zeus on the Loose 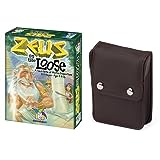