Hy-yah! Splat! La-la-laaa! Burp! The race is on in Yackety Smack! Record your own creative sounds on the Sound Smacker and try to be first to identify the corresponding cards. Win a round and you collect the cards in play and get to record your own laugh-out-loud sounds for the next round!

Collect the most cards!

All players count their cards. The player with the most cards wins!

Name Play: The Recorder records one sound and the name of one player. When the correct card appears on the pile in front of the player whose name was recorded, players race to hit the Sound Smacker to win the round.


Yackety Smack extreme: When playing with 5 or more players, record three sounds instead of two so that three cards must be visible before a player can hit the Sound Smacker. 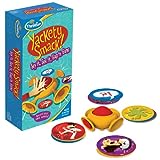