WTF: (What the Fish!) Game Rules Play one FISH card that no opponent can kill.

This game is not played in turns. Players may play cards onto the discard pile at any time.

Players only draw cards if they invoke the Flint Flush rule explained later.

After the dealer places the remaining cards (draw pile) in the middle of the playing area, he/she exclaims "What the Fish!", which signals everyone to pick up and look at their cards.

The fastest person to place a FISH card face up on the table (this starts the discard pile) starts the game.

The only way to win the game is to have a FISH card that swims to freedom (does not get killed). Every player continually looks for the chance to play one of his/her FISH cards at one of three times during the game:

(A player can only play one FISH card at a time).

If opponents play one or more KILL card(s) whose combined value is greater than the rank value of the FISH, the FISH is dead unless the player of the FISH can save it.

Opponents can all contribute KILL cards to kill a FISH.

A FISH is saved by playing one or more protection cards whose combined value is of greater value than the KILL card(s) played on the FISH.

A player can also attempt to save his/her FISH by playing WTF cards, which may enable the FISH player to obtain additional protection cards (see WTF cards below).

If the FISH player is not able to save his/her FISH, he/she must place his/her hand face down on the table and at the same time announce, "Belly up, my fish is dead".

At this point, any player may place a (new) FISH on the discard pile in an attempt to swim to freedom.

A Player may not hold any FISH separately from his/her hand in order to be the first person to put down a new FISH.

WTF cards can be played at any time by placing one face up on the table and announcing how the card is to be played. After the effect is realized, the card is placed at the bottom of the discard pile.

If no player wants to play a FISH card, all players reveal their hands, and the highest ranking FISH must play.

If the draw pile is ever exhausted, take all the cards from the discard pile (except the FISH in play and KILL cards played on it) and shuffle them to form a new draw pile.

If a player is able to play one FISH to the discard pile, and no opponent can KILL it, that player's FISH is free, and he/she has won the game.

After the dealers exclaims "What the Fish!", Player A is quickest to look at her cards, finds a #8 FISH card and puts it down.

Player A lays down her #11 PROTECTION card (greater than the 10 Kill).

Player C lays down his only KILL, a #9, hoping another player has a KILL to add up to more than the #11 PROTECTION card.

Player A lays down (not on the draw pile) a WTF card that indicates "Swap Entire Hand with Another Player" and chooses to swap hands with Player C.

Player B lays down a #13 KILL, with the total Kill number adding up to 22.

Player A does not have a high enough combination of PROTECTION cards greater than 22, and does not have any WTF cards that can help. She then announces "Belly up, my fish is dead!"

Player C has no more FISH cards in his hand and decides to execute a Flint Flush.

Play continues until a Fish cannot be killed... 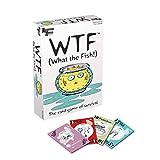