Word on the Street Fan Site Published by: AMIGO Spiel + Freizeit GmbH, Out of the Box Publishing

In Word on the Street, players - either individually or in teams - try to claim letter tiles from the game board.

To set up the game, seventeen letter tiles (all the consonants in English other than j, q, x, and z) are placed in a strip down the center of the game board - the median strip of the street, if you will, which has two "traffic lanes" on either side of it.

On a turn, one team is presented with a category such as "types of fruit" or "something a player is wearing", and that team has thirty seconds to come up with an answer in that category, then move the letters in that word toward their side of the game board.

Any letters in the word that are not on the game board are skipped. If the answer were "pineapple", for example, the team would move P, N, P, P and L.

If a team moves a letter off the game board, it has claimed that letter and that tile will not move for the remainder of the game. The first team to claim eight letter tiles wins!

Word on the Street: Expansion 1

Word on the Street Game Rules Capture Letter Tiles by selecting words that contain the desired letters and pulling the letters off the street before the opposing team can pull them back.

The first team to capture eight Letter Tiles wins Word on the Street!

Word On The Street 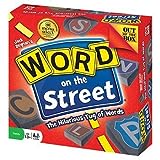 Word on the street revised

Word On The Street Junior

Word On The Street