This variant allows players to have more control over choosing Construction cards, while increasing the interaction between players. It is possible, and even recommended, to use the advanced variant with the expert rules.

On the first turn, all players draw three cards from the Construction cards deck. Prom those cards, players choose two of the three cards: one for its number and another for its action. Players cannot use the same card for its effect and number.

Then, players place the cards in front of them and use them per the basic rules (the house number of one and the optional effect of the other). Discard the cards after play.

Next, each player passes their remaining card, effect side face up, to the player on their right. Finally, a player deals two Construction cards to each player for the next turn, beginning with the architect who has the Solo card.

The other rules of the basic version apply. 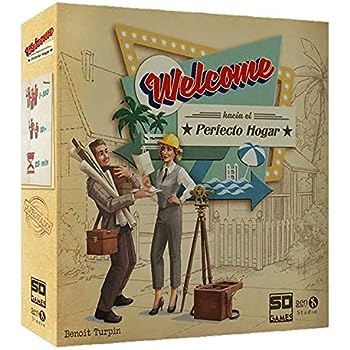 Welcome To Your Perfect Home (Bilingual)