The world is coining to an end. You, the most powerful leaders in the world, have only 15 minutes to build an escape rocket and leave this doomed planet. With limited time to build the rocket, there may not be enough seats for everyone to live.

You have to work together. However, in the end, only the most influential survive. Contribute Resources

to build the rocket, but gain Influence

to claim a seat... ... possibly one that someone else built.

How many seats are built on the Escape Rocket

Gather the Civilization cards 1. matching the number of players in the game, noted, in the bottom right corner. Each player selects one of them to use, and puts it on a stand with the actions-side facing them.

Each player gets a Reference card 2.

Place the empty, open box in the center of the table. This becomes The Project 3.

Place the Event cards 4 within reach.

Set the Hourglass 5 on The Project.

Set the 1st Player Coin and both Token bags within, reach. Keep tokens in their bags. Players start with no tokens.

The first player to flip over the hourglass gets the 1st Player Coin and starts the game. But finish the rules first, ok?

During the Take Action phase, players each take one action in clockwise order, starting with the player who has the 1st Player Coin. The actions you can take are:

At the end of each Take Action phase, all players contribute... unless you were nuked.

The Contribute phase is when everyone contributes Resources to The Project (or not). Contribution does not follow turn order; just shout how much you want to contribute! Players contribute Resources by placing them in The Project.

Only Resources inside The Project increase seat count at the end of the game.

Whoever contributes the most resources is awarded:

Event cards are occasionally helpful, seldom convenient, and cost precious time! They can even ruthlessly alter the rules and victory conditions in horrifying ways.

When you draw an Event card, it takes effect immediately, in one of two ways:

Do not shuffle the event deck between games!

Keep your Resource and Influence tokens in full view of all players. You must reveal how much you have when asked.

If you are eliminated, tip over your civilization card and return all of your tokens. You cannot vote, contribute, play cards, or take actions. You are dead.

If a player is intentionally taking too long to play, the other players may pressure them by counting down 10 seconds out loud. If any player gets to zero before the stalling player makes a decision, they are eliminated.

When time runs out, no actions can be taken, no more contributions can be made, and no more cards can be played. If time rims out during an event, complete that event before boarding the ship.

To break ties in Resources, someone counts down from three, then everyone points at the player they want to win the tie. If still tied, vote again.

When boarding the rocket, ties in Influence are decided by most Resources. If there is then a tie in Resources, the tied players may make one final speech before the vote is cast.

Mike adds one Resource, and shouts "One!" Shari throws in two and calls it out. Mike adds another, and yells his new total, "Two!"

Ian throws in four! Nobody challenges. He wins the contribution, so he takes the 1st Player Coin, one Influence, and draws an event card.

Ian reads the event card, following its directions, then starts the next round by taking an action.

Peter adds three Resources and shouts, "Three!" Astrid also throws in three and calls it out. No one else contributes, so Peter and Astrid are now tied for top contribution.

To pick a winner, someone counts down from three, then everyone points at Peter or Astrid to cast their vote. Still tied? Vote again until there's a win. Hurry though, the world is ending!

When time runs out, count the Resources contributed to The Project to see how many seats were built. Players then claim these seats in order of most Influence to least.

Everyone with a seat on the rocket escapes to victory. Everyone else is a dead loser. 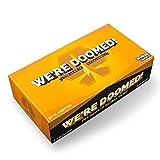