Push your snail around the track and collect trinkets along the way. Cross the finish line first to win the race!

The game is played in turns, in a clockwise direction. The Dice you roll will tell you how far your snail will go. On your turn:

Keep an eye on the lines!

Each time the lines on your snail's shell line

up, it counts as one shell turn. Make sure to count out loud whenever your snail's lines line up. This way you won't lose track of your progress, and the other players can count along with you.

You will need to collect one of each trinket before crossing the finish line (key, button and gem).

Whenever your snail touches a trinket on the track, pause the game and pick up the trinket. If you haven't already collected that type of trinket, then place it on your snail card.

Otherwise, place it back on the track immediately behind your snail so that another player can collect it.

Then, proceed with the rest of your snail's run.

When a snail passes the finish line (and has collected all 3 trinkets), place it on the podium in the position it finished (first snail to finish gets 1st place, second snail gets 2nd place, etc)..

The game is over when all the snails have crossed the finish line. Then the winners all cheer! 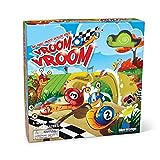