Take on the role of a Disney Villain. To win, you must explore your characters unique abilities and discover how to achieve your own story-based objective. Each Villain Guide will inspire you with strategies and tips.

Once you've figured out the best way to play as one Villain, try to solve another. There are six different Villains, and each one achieves victory in a different way!

Each player takes the role of a different Disney Villain. Each Villain has a different Objective they are trying to achieve. Each turn, players move their Villain Mover to a location on their Board and perform actions that are available there.

As soon as a player has fulfilled their Villain's Objective, the game ends and that player wins. Read the Objective on your Board out loud so that all players know your Objective.

One side of the Reference Card lists how each Villain reaches their Objective. This will help you determine if an opponent is approaching victory. The other side identifies the actions.

The Villain Guide includes details on your Objective and other information specific to your Villain. This will come in handy during the game.

Each player has their own Board, representing their Villain's Realm. All cards played to your Board are considered to be in your Realm.

appear in both the Villain deck and the Fate deck and have an Ability that affects other cards or actions.

To play an Item from the Villain deck, pay its Cost (shown in the upper left corner) and place the card below any unlocked location in your Realm, unless the card says to attach it to an Ally.

If an Item says to attach it to an Ally, you must place the Item under an Ally in your Realm. If there are no Allies in your Realm to attach the Item to, you may not play that Item.

Effect cards appear in both the Villain deck and the Fate deck and are one-time events. To play an Effect, pay its Cost (if one is shown in the upper left corner), do what the card says, then discard it face up to the appropriate discard pile.

Example: Pay 1 Power to play this card, then discard it face up.

Condition cards are unusual because you play them during an opponent's turn. They are not played by performing a Play a Card action.

If you have a Condition in your hand and the requirement on the card is met during an opponents turn, you may immediately play the card, do what it says, and then discard it face up to your discard pile.

After a Condition is played, the opponent's turn continues. Do not draw a new card. You must wait until the end of your turn to draw back to four cards.

A card with an Activated Ability is played to a location as normal. Each time you wish to use the card's Ability, you must perform the Activate action and pay the Activation Cost, if any.

If an Ally that has an Activated Ability is used to Vanquish a Hero, discard it as normal.

Note: Some Villains have additional card types unique to them. These are explained in their respective Villain Guides.

Each player has two decks of cards: Villain cards (with colored backs) and Fate cards (with white backs).

Any card that is at a location on your Board is considered to be in your Villain's Realm. A card's Ability is ongoing and in effect for as long as the card remains in your Realm.

There is no limit to the number of Villain cards or Fate cards that may be played to a location. As cards are played to locations, slightly offset them so all cards at a location can be seen.

Ally cards appear only in the Villain deck and represent your Villain's henchmen, helpers, and pets. To play an Ally, pay its Cost (shown in the upper left corner) and place the card below any unlocked location in your Realm.

Once Allies have been played to a location, you may use them to defeat Heroes at the same location by performing the Vanquish action. Each Ally has a Strength (shown in the lower left corner), which may be modified by other cards in the Realm.

Additionally, most Allies have an Ability that affects other cards or actions. Once an Ally is in your Realm, you'll need to decide whether to use it to defeat a Hero or keep it in your Realm for its Ability.

Hero cards appear only in the Fate deck and represent the irksome do-gooders who are trying to stop your Villain's sinister plans. You play Heroes from your opponents' Fate decks by performing the Fate action.

To play a Hero, place the card so it is covering the top of any unlocked location in that opponent's Realm.

You can use a Hero to hinder an opponent's progress by covering useful actions. The actions covered by a Hero are no longer available until the Hero is moved or defeated.

Each Hero has a Strength (shown in the lower left corner), which may be modified by other cards in the Realm. Additionally, most Heroes have an Ability that makes it harder for your opponent to achieve their Objective.

If there are multiple Heroes at a location, and the Hero covering the action symbols is defeated, move any other Heroes down so one of them covers the symbols.

Do the following, in this order:

Move your Villain Mover to a different location. You may move to any location in your Realm, as long as it is not locked. You may not stay at your previous location.

The Lock Token indicates that this location is locked. You may not move to a locked location.

Each location has symbols representing the actions you may take when you move there. You may perform all of the available actions in any order. Each action may be performed one time for each symbol that appears. All actions are optional.

During the game, actions may become covered by Fate cards. If an action is covered, that action is unavailable and may not be performed until the card covering it is moved or discarded.

When an action is uncovered, it is immediately available and may be performed if your Villain is at that location and it is still your turn.

At the end of your turn, if you have fewer than four cards in your hand, draw from your Villain deck until you have four.

If you need to draw from your deck when it is empty, shuffle your discard pile to form a new deck.

Now it's the next player's turn.

Important Your Villain's location dictates what actions you may perform. However, you can perform those actions at any location, as long as it is not locked.

Take Power from the Cauldron equal to the number on the symbol.

Power is the currency of the game. You need Power to play cards and activate Abilities.

Play a card from your hand. You may play only one card for each Play a Card action.

Most cards have a Cost that is shown in the upper left corner. When you play a card, you must pay its Cost by returning that many Power to the Cauldron. If you do not have enough Power to pay a card's Cost, you may not play the card.

An Item or Ally may be played to any location in your Realm, as long as it is not locked. Play the card to the bottom of your Board, below the location.

Choose one Item or Ally in your Realm with an Activate symbol. Pay the card's Activation

Cost, if any, and perform the card's Activated Ability. (See Types of Cards for details).

Choose an opponent to target and reveal* two cards from the top of their Fate deck. Play one card and discard the other face up to that opponent's Fate discard pile. You decide how to use the Fate card's Ability against your opponent. By taking a Fate action, you can disrupt an opponent's progress.

A Hero may be played to any location in that opponent's Realm, as long as it is not locked. Play the Hero to the top of their Board, covering the top of the location.

Move an Item or filly

Move one Item or one Ally at any location in your Realm to an adjacent location.

You may not move an Item or Ally into or out of a locked location.

You may not move an Item that is attached to an Ally or a Hero.

Move one at any location in your Realm to an adjacent location. You may not move a Hero into or out of a locked location.

Defeat one at any location in your Realm by using one or more Allies that are already at the same location as the Hero.

Each Ally and Hero has a Strength (lower left corner) which may be modified by other cards in the Realm. The Ally must have a Strength equal to or higher than the Hero's Strength. Multiple Allies may be used by adding their Strengths together.

Discard as many cards as you wish from your hand. Cards should be discarded face up to your Villain discard pile. Getting rid of unwanted cards will give you new options on your next turn.

When discarding, do not immediately draw new cards. You must wait until the end of your turn to draw back to four cards.

Note: Each Board is different, and some of these actions may not appear on your Board.

As soon as a player has fulfilled their Villains Objective, the game ends and that player is the winner!

Note: Some Objectives are only fulfilled at the start of the turn, as stated on the Villain's Board. 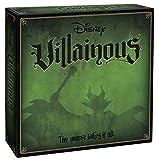 Villainous: Wicked to The Core