Players try to found a powerful kingdom. They hungrily expand their domains by taking more and more countries, but only those that are well maintained by farmers ensure the founding of a truly flourishing kingdom.

After playing 4 games, the player with the highest number of points wins.

Choose a dealer, who shuffles the country cards and deals 10 cards to each player. The same applies whether there are 2, 3 or 4 players.

Put all the other cards aside, as they will not be used during the first game. Each player receives a two-part kingdom board that they join together and place on the table as shown:

The player to the dealer's left starts by playing the first country card.

The winner of the round puts the cards won face up on their kingdom board from left to right and sorted by color (see example A). If there are no cards on a player's kingdom board, they can be sorted in any order.

Tip: Put the card with the highest value on top. However, if a player already has cards on their kingdom board, they must put the new cards on top of the country cards of the same color. As soon as the cards have been put in their places and the next round has started, they may no longer be moved.

Important: Only the cards on top score points at the end of each game. The winner of the round starts the next one.

Richard is the starting player. He plays a red 3. Susan has no red cards and plays a blue 5. Frank plays a red 6 and Lucy plays a red 4.Frank wins the round and puts his cards on the kingdom board like this:

Frank has 11 points at this stage and receives one farmer counter as shown on red 6, his winning card.

Having farmers means that countries are fertile and there is enough food for the population. If a player wins a round, they get the number of farmer counters shown on the winning card.

Frank's red 6 shows one farmer, so that's what he gets, and he has to put it on a kingdom board. The first two places on the kingdom boards have "free" farmers on them.

Frank has to put his farmer on the first available spot (from left to right), in this case the first empty spot on the third place on his kingdom board.

Important: If at the end of the game a player has a country card on a place on a kingdom board but there are no farmers there, that card scores no points, and the player gets 5 penalty points for each missing farmer. See examples B and F.

It can also happen that a place on a kingdom board has the required number of farmers on it but no country cards. In that case the player scores the number of points shown on the place on the kingdom board (see example G).


Country cards with values 1 and 2

Cards with values 1 and 2 are special ones: You can only win farmers with them if you lose them in a round. If you played a 1 card in a round that you lost, you receive one farmer if it matched the color of the winner's card (see example B).

Some countries have no future...

Tip: You can use the 0 card to nullify part of an opponent's kingdom (see example B).

Mary plays a blue 7. Mary wins this round because blue is the color to follow. She puts the 2 blue cards, the green card and the red card on her kingdom board. She also gets 1 farmer, which is what is shown on her winning 7 card. Richard played a 1 that didn't match the color of the winner's card, so he gets 2 farmers.

She puts her 2 red cards, the green card and the blue card on her kingdom board. Richard played a 2 that didn't match the color of the winner's card, so he gets 1 farmer. The same rule applies to Frank, so he too gets 1 farmer.

When all the players have played their country cards, scoring is as follows:

Suppose Frank didn't win any more rounds and received no more farmers, so finished the game as shown in Example B. He adds all the points from his countries: 0+8=8 points.

He cannot add the 6 green points because this third place on the kingdom board doesn't have enough farmers. He is one farmer short of being able to maintain the country, so he gets a 5 point penalty. His fi nal score is therefore 8 - 5 = 3 points.

She adds all the points on the top country cards that have enough farmers: 8+6+2=16 points. As well as that, the fourth place on her kingdom board has enough farmers but no countries, so she gets 3 extra points as shown on that place. Her total is 16 + 3 = 19 points.

Write down each player's score and start a new game. When you have played 4 games, the winner is the player with the highest total score. 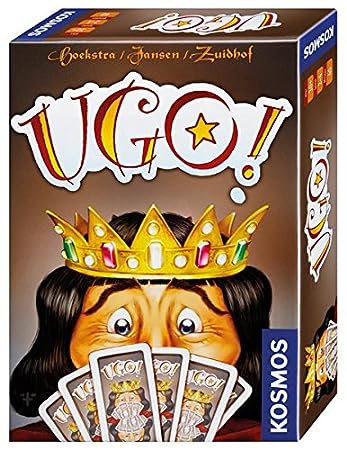