Players are first equally distributed between 2 separate playing areas (usually 2 separate rooms) and then each player is randomly dealt a facedown character card.

Players play the game by saying what they want in order to select a leader for their room. The leader chooses hostages (players who will be sent to the other room at the end of the round).

The game consists of 3 timed rounds. Each round is shorter than the previous round. At the end of each round, the hostages selected by the leaders will be traded into opposing rooms.

The game ends after the last hostage exchange. Everyone reveals their card. If Red Team's Bomber is in the same room as the President, then the Red Team wins. Otherwise the Blue Team wins.

1. Set Up The Character Deck.

The character deck consists of the President card, the Bomber card, and an equal number of Blue Team and Red Team cards. There will be one character card for each player in the game.

If you are playing with an odd number of players, include the Gambler card (see Gambler section on page 10). Shuffle the character deck.

Players should be separated randomly and as evenly as possible. The "rooms" can be separated by a wall, door, or simply two open areas at a distance from each other.

It is not important if players can see one another, but players in the separate rooms shouldn't be able to hear one another.

Every player receives l facedown character card. The character cards are secret but can be revealed during the game. Players should not look at their own cards until the game begins.

Now the game begins with the first round. The first round of the game lasts 3 minutes. The second round is 2 minutes, and the last round is 1 minute.

Round time can be kept by anyone with a stopwatch. Time is never kept secret. The end of a round should be clear to all players.

You can't just mosey into the other room whenever you feel like it.

3. No Communication Between Rooms.

No yelling anything to players in the other room. No eavesdropping. Even if you can see into the other room, there is no sign language permitted.

Do what you want with your character card. Show it to someone, everyone, or nobody.

However, no swapping character cards with another player, and if you are going to show someone your card, you have to show all of it. You can't just show the color of your card.

The leader is the player who holds the leader card and chooses the hostages to leave the room at the end of the round.

The first leader of a room is the player who is appointed by another player. To appoint a player, point to them and say, "I appoint you as leader!" A player can never appoint themselves. The appointed leader then takes the leader card as a visual identifier. Leadership should never be a secret.

Important: Before beginning the game, pay attention to how many players are in the game as this dictates how many hostages are exchanged at the end of each round.

Want a different leader? Here are the 2 ways to do that!

If you are leader and don't want to be (usually because you want to be a hostage), then simply hand the leader card to a willing player. The player may accept or refuse leadership, but if they do accept leadership, you can't become leader again until the next round.

If there is still time in a round and you want a different leader, raise one hand into the air (so your usurping attempt is clearly visible) and point your other hand toward the player you want as the new leader.

Note: you can point to yourself. Once a majority of players in the room (more than half) are pointing to a single player, that player becomes the new leader and receives the leader card.

At the end of every round, the room leaders must perform the following 5 steps in order:

After the last hostage exchange, the game ends. Everyone reveals their cards (unless playing with the Gambler).

When playing with an odd number of players, shuffle in the grey Gambler card with the other character cards. If you are the Gambler, pause the game by showing every' one your card after the last hostage exchange. This should be done before all other players reveal their cards.

Don't worry, players should wait for you. This isn't a race. You must then verbally announce who you think is about to win the game (Blue Team or Red Team). You win if your prediction is correct, so don't worry about anything else.

Once you get familiar enough with the Basic Game, try the Advanced Game with more rounds, characters, and 3 additional rules!

If you have more than 10 players, players are no longer limited to revealing their entire card. Instead, players may choose to reveal only part of their card.

Try adding a 5 minute round and a 4 minute round, but only if you have more than 10 players. If you don't have enough players, stick with 3 rounds (see your leader card). 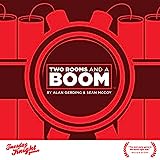