The object of the game is to score for more "Triple Crosses" (lines of three of same colored Discs) than your opponent.

Place the Grid onto the Base and give each player 12 Discs and 4 Blockers of the same color.

Each Player has 4 Blockers. Until a Row is blocked Discs can be placed to push out a Disc from a full Row, if desired.

Each Triple Cross of three Discs counts as 1 point. A Triple Cross can be either diagonal or vertical (A Row of the same color DOES NOT count as a Triple Cross and does not score a point).

A Triple Cross can share Discs from another same colored set.

When all the Discs have been played, players tally up their scores. Each diagonal and each vertical Triple Cross scores one point.

The player with the highest total points wins.

In the event of a tie, play again as a tie breaker round! 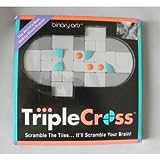