Players pass cards to their left, simultaneously, trying to collect three of the same cards. Once a player has a set of three cards, that player calls out",stop!"

The game pauses, and the player then makes the face that matches the emotion shown on the set of cards to the other players, who must guess that emotion to win points.

Each player receives a Reference Card and places it face up on the table. Any remaining Reference Cards are not needed and put back into the box.

Shuffle the 39 cards well and deal out cards to the players based on the following:

The remaining cards are placed face down in the center of the table, to form the draw pile.

Note: it may happen that a player (or several players) has a set of three same cards immediately after being dealt cards.

Advice for parents: before playing for the first time all the 13 emotions should be explained carefully in detail, so everyone knows what a certain emotion means.

Each player chooses one card from their hand and puts it face down in front of the player to their left, at the same time. When everyone is ready, all of the players take the card that was passed to them and put it in their hands.

Important: Putting a card face down in front of your neighbor and picking up the face-down card should be done simultaneously by all players, so no one gets confused.

The game continues as described until a player has a set and calls, "stop".

As soon as a player has a set of three cards (no matter when this happens), the player says, "stop", and the game is paused.

The player carefully looks at the word that is written on their set and makes the face that matches the emotion (without saying something or using their hands).

The other players look carefully at the player's face - they are not allowed to look into their own cards (in order to make any conclusions from their cards).

Important: Nobody may shout out their guess of what the solution is!

Note: When a player is making the face of the emotion, they may use the illustration on the cards as a guide - but they are, of course, allowed to show the emotion in their very own way!

Laura has three cards with the number 6 in her hand and calls, "stop". The emotion on card number 6 is "happy". Laura grins and smiles brightly to look as happy as possible.

Now the player to the left goes first and has exactly one chance to guess the emotion. If the guess is wrong, then it is the next player's turn to take exactly one guess.

This goes on in a clockwise direction (one single player after the other) until someone names the correct emotion.

Very Important: Each player has just one guess and just one turn to try to figure out the emotion!

The two players put their won cards under their Reference Card - that's where the cards stay for the rest of the game. Each card won counts as 1 point at the end of the game.

The player to Laura's left, Tim, has the first guess. He tries it with "excited". That's unfortunately wrong. Now, Nadia, the player to Tim's left, has a turn to guess.

If all the players have guessed the wrong one time, the guessing round ends. In this case, the player who made the face receives only one card of the set as a point and puts it under their Reference Card.

Nobody receives the remaining two cards of the set. They are not needed anymore and put back into the box.

The player who had the set now draws one card from the draw pile and puts it in their hand (even if nobody guessed correctly).

Note: if the player has, after drawing one card from the pile, still less than three cards in their hand, then they draw as many cards as needed to have three cards.

It may happen that several players say, "stop" at the same time. In this case, the sets will be played individually one after the other - the oldest player first and then the others, in a clockwise direction.

After all, sets have been played, the game continues. Place one card face down in front of the player to the left, while picking up the card placed in front of you. This continues again until someone has a set of three cards and calls, "stop!"

If the draw pile is empty, players cannot draw cards anymore. The game still continues, but once a player finally has less than three cards in their hand with no cards in the draw pile, the game ends (unless someone is able to call",stop").

All the cards that the players are still holding in their hands are set aside and don't count as points.

Now, everyone counts the number of won cards under their Reference Cards. Each card counts as 1 point. The player with the highest total is the winner!

Each player receives one Reference Card and places it face-up on the table. You need 13 pairs of the Emotion Cards (two of each type of card). These 26 cards are shuffled and placed as a face-down 5x4 grid on the table.

The remaining cards are placed as a face-down pile to the side of the table. The oldest player goes first, and players take turns one after the other in a clockwise direction.

The active player takes one face down card of their choice from the grid and lifts it so that only the player to their left (and no one else, even themselves) can see the word and the illustration on the card.

The player to the left now makes the face of the emotion from the card (without words or using their hands) as well as they are able to. Then, the active player puts the lifted card back to its space in the grid, face down.

If both cards show the same illustration and emotion, the player takes the pair and puts them under their Reference Card (each won card counts as 1 point at the end of the game). Now the turn of the active player is over, and the next player in clockwise direction becomes the new active player.

If both cards show different illustrations and emotions, both cards are turned over again and placed face down on their position in the grid.

As a penalty for not finding a pair, all the other players receive one card from the pile and put it under their Reference Cards (each count as 1 point). Now the turn of the active player is over and the next player in clockwise direction becomes the new active player.

The game continues as described in clockwise direction until there are just two face-down cards (one face down pair) left in the grid. These two cards remain on the table. Now, everyone counts the number of cards that they have won. The player with the highest total is the winner. 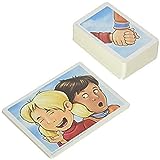