You work in the security division of the Time Repair Agency (TRA). As you know, changing history is a crime, so our job is to apprehend the Time Breaker currently at large.

Unfortunately, we don't have a good description of the perp, so we're using a cube to represent them. The sooner we can capture this Time Breaker, the less damage they'll be able to do to the Time-Space Continuum.

Therefore, whoever brings in this dangerous criminal will earn a bonus and maybe even get a promotion. Quick everybody, into your Time Machines!

To win, you must move your piece to the same location as the Time Breaker, declare that they are under arrest, and return with them to the TRA tile before any of your opponents.

During your turn, you will draw one card, then take one of three possible actions: Play, Follow, or Wormhole.

Draw: Always start your turn by drawing a new card.

Take Action: Choose one of these options:

These cards allow you to move your piece to the next tile over.

Some allow lateral (left or right) movement, some allow vertical (up or down) movement, and some allow both. Diagonal moves are never allowed. You can only move from one tile to the next.

These cards move your piece directly to the specific tile shown. There's a jump card for each tile on the board.

If your piece is already on that tile, jump to any tile you wish.

Each of these cards has a different effect. Follow the directions on the card. There are 8 different Actions, which work as follows:

These cards represent actions taken by the Time Breaker, but otherwise, they function like Action cards. Follow the directions on the card. There are 3 types of Breakers:

hese cards are played when it's not your turn to nullify another player's card play. But Stop Time only cancels a card's functionality, it cannot prevent a player from Following an arrow.

Yes, a Stop Time card CAN cancel another Stop Time. If you draw a Stop Time during a Wormhole or Quantum Leap action, you simply show it to everyone and add it to your hand.

When a Breaker card says to "crash" a gate, remove the tile from the grid and place it to the side with other such tiles, closed-side up.

The tile must be removed from the grid so that a gap is clearly created, since these holes can be skipped over when playing a Move card. All players' pieces on the tile when it crashes are returned to the TRA tile.

Whether by Following a green arrow or playing a Jump card, if you move to a gate that has been closed, your piece ends up on the TRA tile.

This can provide a convenient way of bringing in the Time Breaker! Note that a Move card cannot be used to enter a closed gate.

Move cards always allow you to move in one of the indicated directions. If your piece would move off of the edge of the board, your piece will instead "wrap around" and land on the other side of the grid.

You can also move over any gaps that appear after the Time Breaker begins crashing gates, landing on the tile beyond the gap.

If your piece lands on the tile currently occupied by the Time Breaker, you can apprehend them. But you have to verbally declare that they are under arrest.

Assuming you have done so, they will move along with you whenever your piece moves thereafter. It's considered good form to make the declaration as soon as you land on the Time Breaker, but as long as you say it before you try to move again, they will accompany you.

If another player lands on the same space, they must also declare the Time Breaker to be under arrest. The Time Breaker will move with whichever player leaves first, regardless of who arrested them first.

Making an arrest is a free action, it does not require a turn.

Moving vs. Being Moved

For example, if someone else plays Return to HQ, they can choose you even if you have the Time Breaker in custody. This represents the Time Breaker making an escape just when you are distracted by being pulled through time unexpectedly.

In other words, if you have the Time Breaker in tow and YOU play the Return to HQ card, you can win. But if SOMEONE ELSE plays that card, your piece alone will be moved to the TRA tile.

We like to imagine you've been summoned back to the office at just the wrong time, perhaps for a completely unimportant reason, like a co-worker interrupting you to say, "There's cake in the break room!"

If you hold a Jump card for a year that has been crashed, you may choose to discard it during your turn and draw a replacement. This is a free action and does not count as your turn action. You can only dump Jumps once during your turn, but you can dump more than one at a time.

Note that Jumping to a closed gate provides an easy way back to the TRA, so you may want to hang on to one of these cards.

If someone cancels your card play with a Stop Time, your turn ends immediately. The card you were going to use goes into the discard pile, and you don't get to do anything else.

If you play On the Move and someone cancels it with a Stop Time, and you were also using a Move or Jump card to control where the Time Breaker was going, you don't have to discard that card, only the On the Move card itself.

You can then cancel either card, but not both (unless you have two Stop Time cards).

The person who has most recently played Chrononauts shall go first.

Alternatively, mix up the players' game pieces and have someone close their eyes and choose one. Play then proceeds in the clockwise direction.

If someone causes the Time Breaker to move to the TRA tile unaccompanied, it means they turned themselves in, so no one gets credit for making the arrest, and thus nobody wins. This is true even if the Time Breaker and a player's piece both return to the TRA at the same time, but not together.

If your piece moves to the TRA tile with the Time Breaker in tow, you win! 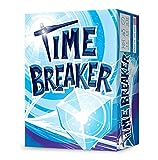