This That & Everything Game Rules In this rapid-fire game, players race to describe a wide variety of PEOPLE, THINGS, and PLACES for their teammates to guess. Try to describe all 6 in 30 seconds!

Place the three decks of cards within easy reach. Designate a scorekeeper and give them the score sheet and a pen.

Divide into teams and decide which team will take the first turn. This team selects their first 'Describer'.

Refer to the score sheet to determine which topic (PEOPLE, THINGS, or PLACES) is in play. The Describer draws a card and takes a moment to study it. You can describe the items on the list in any order, so it is advised to start with the items you think your team will guess the fastest.

The Describer's teammates listen to the clues and shout out guesses at the same time. There's no time to be polite, so call out all guesses as they cross your mind. There is no penalty for wrong guesses.

Someone on the opposing team keeps time (30 seconds per card). The timer starts the moment the Describer starts to speak, and any guesses made after time runs out are not counted.

A Describer must not:

Note: If a team does not comply with the rules, they lose their turn.

Play now moves to the next team. All players must take a turn being the Describer.

When time is up, 1 point is given for each item on the card a team guessed correctly. If a team guesses all 6 items on a card, they earn 1 additional bonus point. Total the scores and the team with the most points wins! 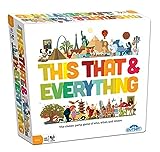 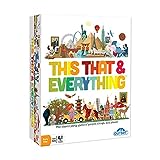 This That and Everything