Put the marbles on top of the igloo, but don't be the player that makes the ice break!

Insert the legs into the three holes on the game base.


Place the holes on the top hoop over the legs and press down gently.

The youngest player goes first. Hold the tweezers and turn them horizontally (see illustration) so they fit into the channel.

Hold the tweezers horizontally and place them over any marble in the channel.

Pick up the marble by gently squeezing the tweezers together.


Players keep passing the tweezers and placing the marbles until one player makes the tissue break and one or more marbles fall through.

Make sure you pass the tweezers to the next player as fast as you can because whoever is holding the tweezers when the marbles tumble will get a letter against them.

The first time a player makes the marbles fall through, the scorekeeper writes the letter "I" next to that player's name. The second time it happens to the same player, that player gets a "C".

Keep playing the game until there is only one player left who hasn't broken through the ice three times.

The last player left without getting ICE is the winner! 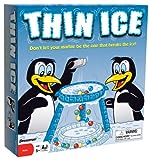