Deep in the American countryside, the little town of Millers Hollow has recently been infiltrated by Werewolves.

Each night, murders are committed by the Townsfolk, who due to some mysterious phenomenon (possibly the greenhouse effect) have become Werewolves.

It is now time to take control and eliminate this ancient evil, before the town loses its last few inhabitants.

Each night, the Werewolves bite, kill and devour one Townsperson. During the day they try to conceal their identity and vile deeds from the Townsfolk. Depending upon the number of players and variants used in the game, there are 1, 2, 3 or 4 Werewolves in play.

Each night, one of them is killed by the Werewolves. This player is eliminated from the game.

The next morning, survivors gather in the town square and try to discover who the Werewolves are.

This is done by studying the other Players' faces for hidden signs of lycanthropy.

After discussing and debating, the Townsfolk vote to lynch a suspect, who is then hanged, burned and eliminated from the game. There are 8 differents kinds of Townsfolk:

These folks have no abilities other than their own intuition.

Each Ordinary Townsperson must analyze the players' behavior to guess who is a Werewolf, and try not to be falsely mistaken for a Werewolf and unduly lynched, hanged and burned.

Each night, the fortune teller can see the true personality of one player.

If the hunter is killed by the Werewolves, or lynched by the Townsfolk, he/she can retaliate. With his/her dying breath, the hunter will shoot, thus eliminating, any one other player.

"Cupido" is the town matchmaker. He/she received the nickname because of his/her ability to make any two people fall instantly in love.

During the first night of the game, Cupido designates two players who will be in "in love" with one another for the rest of the game. Cupido can choose him/herself as one of the lovers.

If one of the lovers dies, the other immediately kills him/herself in a fit of grief. A love cannot, even as a bluff, vote to lynch their lover.

Special Case: If one of the lovers is a Werewolf and the other one is a Townsperson, the object of the game changes for these two players. The pair's only wish is to live in love and peace, and therefore must eliminate all other players (Werewolves and Townsfolk) from the game, by using the standard game rules.

This Townsperson knows how to make two very powerful potions:

The first is a healing potion, which can be used to resurrect a player that is killed by a Werewolf. The second is a poison, used during the night to eliminate one player. Each potion can only be used once per game. The Witch can use either potion on him/herself if he/she wishes.

If he/she wishes, the Witch can use the poison at night and then follow that up with the healing potion the next day.

The Little Girl is very curious. She can open her eyes during the night to spy on the Werewolves.

However, if she is caught in the act by the Werewolves, she immediately dies of fright, silently, instead of the designated victim.

The Little Girl can spy during the night only during the "Werewolves awaking" phase. When the Little Girl is in play, it is necessary for all players to avoid hiding their faces (with hands, cards, etc). when sleeping.

Instead of being dealt, like the rest of the characters, this card is entrusted to one of the players.

Just like a real Sheriff, this player is elected by a vote of the Townsfolk. The player receiving the most votes gets to be the Sheriff.

Once elected, the Sheriff cannot refuse the honor. Henceforth, this player's votes count as 2 votes (always applied to a single player, not split). If the Sheriff is eliminated, upon his/her deathbed, the Sheriff names a successor, who then becomes the new Sheriff.

If the Thief is used, two additional ordinary Townsfolk cards are added to the deck at the beginning of the game.

After the cards are shuffled and dealt, the two extra cards are placed face down in the center of the table.

Players can use whatever character card mix they agree upon. That being said, the best way to learn how to play is to use the following basic mix:

2 Werewolves (or 3 according to the chart below)

Standard Townsfolk (according to the chart below)

When using the basic mix, the Moderator (see below) uses only the Standard Turn rules (1-7), and ignores the Setup Round (D-F).

After playing once or twice this way, you may slowly add the other characters. The most important thing to remember about this game is the atmosphere. Because the game is quite short, you can play a few games at one sitting and change the characters used in the game.

It is very interesting to use the particular characters even when you have a smaller number of players. This really adds to the suspense and helps create a tense and unexpected atmosphere.

The setup round is now complete, and the Moderator now continues with the standard turn.

The Townsfolk win if they manage to eliminate all Werewolves.

The Werewolves win if they kill the last Townsperson.

The Lovers win if they are the surviving Townsfolk/ Werewolf pair, and all other players are eliminated.

The Werewolves of Millers' Hollow 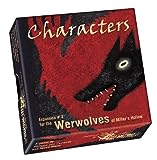