The Towers of Arkhanos Game Rules After decades of searching for the most concentrated magic in all of Drunagor's realms, Arch Magician Arkhanos finally discovered the ruins of Gil-Garoth!

Reawakened and surging with power, the ruins soon drew the attention of magic schools from across the realm, each of them eager to siphon off some of its mana for themselves.

Choose a magic school and guide your master and their apprentices in manipulating the mystic stones of the ancient Gil-Garoth. Build arcane towers to channel the power of past civilizations, and release those powers to help you in this quest.

But beware, inattentive magicians can become imprisoned in the towers for all eternity. Gain the most prestige to rule the towers of this magical city!

At the end of the game, the player with the most prestige wins!

Players will score prestige by helping to construct the four wizard towers and by having the most apprentices and masters on each tower floor.

1. Find the 4 floor tiles with pink starred pillars on their central side (which has the rainbow-colored center square) and shuffle them.

2. Place 3 of these floor tiles on the table in a triangle, showing their outer side. These represent the first floor of each of the outer towers.

3. Place the last floor tile of these in the middle of the triangle, showing its central side.

4. Shuffle the rest of the floor tiles, showing their outer side, into a stack nearby.

5. Collect all of the prestige tokens in a supply nearby.

6. Place the mana pool board nearby.

7. Each player chooses a color and takes the spellbook board and meeples matching their color, creating their personal supply of meeples.

8. Put all the dice in the bag, and shake it to mix the dice.

9. Choose the first player in any way you want. (How about the player who visited a tower most recently?). Give them the bag, and begin play!

On your turn, you'll do the following:


Then, the next player in clockwise order takes their turn.

Once there is only one die left on the table, the round ends. Place this die on the mana pool board, on the space matching the current round. Then, the first player passes the dice bag to the player to their left, who becomes the fi rst player for the next round. Begin the next round!


Phase 1: Place a Die and Meeple

You must choose one of the rolled dice on the table, and place it on an empty pillar of any floor tile, filling the pillar. Then you must take a meeple from your supply and place it on the space next to that pillar.

The central tower can hold dice of any number and color. However, the outer towers can only hold dice of particular numbers and colors, as shown below.


Parts of a Floor Tile

For example, this could hold two purple "4" dice and one purple "6" die.

Yellow and pink dice with numbers of 5 and 6 can be placed here.

For example, this could hold two yellow "5" dice and one pink "5" die.

Yellow dice of different numbers can be placed here.


What if I run out of meeples

Let's reiterate-you must place a meeple along with the die. If you have no meeples toplace, it's because some are on your spellbook (page 7).

In this case, you must cast a spell, which frees up the meeple so you can place it.


Can I always place on the central tower

Yes! Even if there's a die on the table that you could place on an outer tower, you can always choose toplace it on the central tower-along with a meeple, as always.

When you place a die on a pillar, you gain the bonus shown on it. There are four kinds of pillar bonuses:

Take prestige tokens from the supply worth a total of 2 prestige and place them next to your Spellbook.

Take a meeple from your supply and place it in your spellbook, on the spell matching the number of the die you placed.

If the prompted spell already has a meeple, this bonus has no effect.

Take a meeple from your supply and place it on a different tower or in your spellbook. (If you have no meeples in your supply or spellbook, this bonus has no effect.


Yellow places a purple "1" die on a pillar with the Build Tower or Activate Spell bonus. They choose to take a meeple from their supply and place it on a pillar of a different tower.

They do not gain the 2 prestige from this pillar bonus. However, this meeple will count toward their prestige when this tower floor is scored later.

If they decided to place the meeple in their spellbook, they would have placed it on the #1 spell, matching the die roll.

If all three pillars of a floor tile are full, score that tower floor as follows. (If you complete multiple floors on your turn, score the floors in the order you completed them).

Count up each player's INFLUENCE on that floor: each apprentice is worth 1 influence, while each master is worth 2 influence.

The players with the most and second-most influence there score PRESTIGE as shown on the mana pool board. (Yes, the floors of the central tower score fewer points!)

After scoring, build the next floor of the tower:

Remove all meeples from the floor tile-except those on pillars without dice-and return them to their players. (Leave all dice and meeples on pillars there. They will be trapped in this tower for the rest of the game).

Each player has a spellbook with 6 SPELLS. As you play, you will mark spells as ACTIVE by placing your meeples on them. (You can only mark spells by gaining various pillar bonuses).

Each spell can hold only one meeple at a time.

At any time on your turn, you may cast any number of your active spells. When you cast one, return the meeple on it to your supply, and then you may resolve its effect.

It's Red's turn to place a die and meeple, but none of the dice on the table look good. Red has a meeple on their Manipulate and Swap spells.

After doing this, they want to deny their opponent a nice die on the table, so they cast Swap to swap it with a die on the central tower.

At the end of each round, the remaining die on the table is placed on the mana pool board, on the space matching the current round.

Dice in the mana pool mark the number of rounds played, and they can be swapped with dice on the table by casting the Exchange spell.

The tenth space of the mana pool is not used in the core game. It will be used in later expansions.

When the game ends, score each incomplete floor tile as follows:


Also, each player scores 1 prestige per meeple in their spellbook.

Each player counts up their prestige, and the player with the most prestige wins the game, and is declared the best wizard in the kingdom! 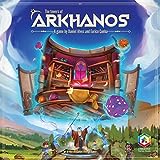 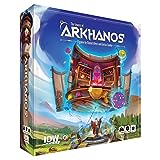