The game is played over 3 rounds. In each round, the players take 4 turns each. The players try to gain the most tickets (points) for their shows, which are mainly gained by setting up shows and by scoring their master cards.

The players must expand their CAMPS (to recruit performers), travel (gaining special effects, raising tents and marketing their shows with posters) and set up shows (gaining points and coins).

At the end of each round, all players gain a new master card and then choose one of their cards to be scored. The master cards represent the decisions the Ringmaster (the player) makes, which consequently will earn points.

In the game, players draft dice in order to get enough power to execute the actions they want.

But beware: The higher the total dice value of the same color you take, the stronger actions you get, but the more coins you must pay at round end!

The starting player takes the first turn, followed by the other players in clockwise order. On your turn, you execute the following 3 steps:

Choose one die from the main tent and place it on any vacant master card in your PLAY AREA. In each round, you will eventually have 1 die on each of your 4 cards.

On top of the card you chose, there is a bonus that may be used once and any time during your turn (with some exceptions).

Anna takes an orange die with value 3. She adds the value of her other orange die for a total of 8 in power. The bonus on the chosen card lets her increase her power by 2 if used with an orange die. Her power is therefore increased to 10.

Determine your current power, which is the value of the die you took this turn + all dice of the same color that you have taken previously this round (those already lying on your master cards). You use your power when executing actions (see below).

Now, you may discard gems of the same color as the die in order to boost your power. For each gem you discard, you increase your power by 2. Clear gems are "wild" (may be used as any color).

Clear dice: If you took a clear die, you treat it as if it was of any color (orange, green or purple). To determine your power, add the value of all dice of one chosen color. Important: A clear die only adds to your power on the turn it is taken. Clear dice lying on your master cards from previous turns are never added to your power.

On her next turn, Anna chooses a clear die, and she decides to use it as if it was orange. She adds the values of her two orange dice, making her total power 11. She then discards 2 orange gems to increase her power by another 4, making her final power 15.


3. Choose one of the following 3 actions

Trainers are very important in this game . During your turn, you may use trainer spaces (trainer tiles or common trainer spaces on the gameboard) for special abilities.

If you execute a "Build" action, you expand your CAMP with camp tiles. The following rules apply:

On Carla's very first turn in the game, she chooses a "Build" action. With the green die and the discarded gems, she has a power of 10 (6+4).

She may, therefore, take green camp tiles with a total value of no more than 10. She decides to build one large and one small camp tile (requiring 9 power).

She also gets a trainer marker and 2 coins as bonuses.

Note: If the general supply of any camp tile Bonus spaces is exhausted, you cannot acquire this camp tile anymore.

If you execute the "Travel" action, advance the wagon that matches the color of the die along its track in a clockwise direction. Move the wagon a number of steps up to the value of your power (you don't have to use your full power).

Gems and posters: You gain a gem or a poster for every such symbol you pass through or land on (poster symbols will only become available after tents have been picked up).

Tent: To pick up a tent, you must end your movement on a tent (and you cannot move any further this turn).

Bernd takes a "Travel" action with a green die and a power of 8. He may move the green wagon up to 8 spaces. He decides to stop on the tent (after 7 spaces) to pick it up. He also gains 4 gems: two green, one purple, and one orange.

He places the tent on a space in his TENT AREA and takes the bonuses (one poster and one trainer marker). The gems are placed in the STORAGE. Since he already has 2 green gems, he must discard one green gem for one coin.

When you gain a gem, place it on an empty matching space in your STORAGE.

When you gain a tent, place it on any vacant space in your TENT AREA (you cannot cover the preprinted tent to the left). Immediately gain the shown bonuses on the space (see page 8).

Note: After you have gained your 4th tent, you cannot take any more tents. You may still end your movement on a tent without taking it.

Note: If all five spaces in your POSTER AREA are occupied (and only then), you have three options: A) replace a poster and discard the replaced poster, B) discard the poster you take or C) choose not to take a poster at all.

With the "Perform" action, you stage shows that match the requirements on your posters and tents to earn points and coins.

Important: The color of the die used for this action is not relevant - only the power matters. Execute the following steps:

Carla may only complete her leftmost and rightmost poster (as there is no tent below her middle poster).

She checks if she fulfills all camp tile requirements: In her CAMP, she has the two orange camp tiles, two purple camp tiles and the two large green camp tiles shown on these cards.

She pays the required gems for the posters (orange, green, purple), plus the extra orange gem for the rightmost tent.

She earns a total of 27 points and 6 coins (including 2 coins for the preprinted tent). The two completed posters are put face down in a stack in her PLAY AREA.

Finally, she reorganizes her remaining poster, moving it to a position with a tent.

On your turn, you may use any number of trainer markers (trainers) on trainer spaces (either on the common spaces on the game board or on your trainer tiles on your player board).

At the end of your turn, move all trainers used this turn to the area by the MAIN TENT. In the table below, you'll find an overview of all trainer spaces.

Most of them require that you execute a specific action in order to take effect. Note: Some trainer spaces are more powerful than others - on purpose.

The symbol on top of each space tells you how many trainers that are required to trigger the effect:

Place one trainer to trigger the effect once.

Place two trainers to trigger the effect once.

Note: When you gain a trainer, this may be used in the same turn. But this trainer cannot be used to improve or change the specific step that gave you the trainer.

When all players have taken 4 turns, the round ends. Now, go through the following steps:

After the end of the third round, the game ends. Do the following in the order shown:

Carla uses one purple and one orange gem to fill in the two empty spaces in the rectangular area. Then, she scores 4 points for this area.

Many cards have a maximum number ofpoints you can score (printed at the bottom of the card). When you score half the points at game end, the maximum score is also halved (rounded down).

Bonuses are gained when activating a master card, covering up a bonus symbol with a camp tile and when placing a tent in the TENT AREA. You can never use a bonus twice (for instance discard 2 trainer markers to build two small green camp tiles). 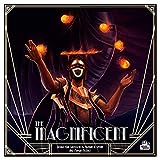