They gazed at the large structure of colorful blocks neatly stacked before them. The goal was simple: climb to the highest level possible. Getting there was more challenging than original- ly thought. Only one climber will make it to the top. Will it be you?

Your goal is to climb to the highest level of the structure. To help with your climb, you may move and rotate blocks. Ladders can be used to climb large distances.

Your blocking disk will prevent other players from using a specific block. Use your tools wisely and at the right time to make the best possible moves in your adventure to the top!

Climbers of all colors may occupy neutral surfaces.

The blocks are divided into smaller, imaginary squares to accommodate Climbers.

The grid is used to prevent any ambiguous situations of placing blocks by ensuring at least 1 smaller square matches up with that of another block.

These blocks can be placed horizontally (laying) or vertically (standing). In the horizontal position, up to 4 Climbers can occupy the neutral square surface. The height of the block in this position is 1, which is the eye height of the Climbers. This height of 1 is the height a Climber can climb without requiring a ladder.

These cubes each have a square neutral surface which can be occupied by a maximum of 4 Climbers. These blocks have a height of 2 in all orientations. A ladder is required to climb these blocks.

These blocks can be placed horizontally (laying) or vertically (standing). In the horizontal position, all Climbers can occupy the neutral rectangular surface. The height of the block in this position is 2. A ladder is required to climb this distance.

In the vertical position, the height of the block is 4. A long ladder is required to climb a height of 4. When oriented vertically, up to 4 Climbers may occupy the neutral square surface of the Size 4 block.

In general, any distance greater than the height of your climber requires the use of a ladder.

A Climber can freely climb a difference of height 1 (equal to the height of a horizontal Size 1 block). To overcome a distance greater than a height of 1, a ladder is required!

Once used, the ladder is immediately removed from the game.

During their turn, the player may place their blocking disk on any unoccupied, free surface. This block is now blocked for the next round. It cannot be occupied, crossed, or moved. Other blocks may not be moved on top of this block.

The player who most recently climbed a mountain goes first. Otherwise, the starting player is determined randomly. Players take turns in clockwise order from the start player.

On their turn, a player may Move their Climber as far as legally possible. This includes horizontal and upward movement. The player may also, at any time during their turn, move and/or rotate 1 unoccupied block.

The player may also use their blocking disk and/or any of their ladders at any time during their turn.

All unoccupied blocks, except for the block moved by the previous player, may be moved - including the large neutral blocks.

Blocks may be placed anywhere else with at least one of its sides touching the main structure. Blocks may be rotated and placed back in the same spot.

Players may look under a block to investigate the upper surface below. This block may be placed back in its original space and is considered to not have moved, provided it has not been rotated.

It is possible to split the main structure into isolated parts.

Players may place a block on another block occupied by one or more Climbers by pushing the Climbers to make room for the block. Climbers may not be displaced from the block they occupy when placing the block.

Play continues until each player consecutively fails to move their Climber upward on their respective turn. The winner is the player with the Climber that has reached the highest level.

If more than one Climber is at the same height, the Climber that reached that height first is the winner. 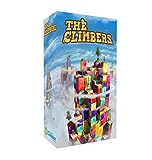