As soon as the news of the disappearance spread, the mountain people of the surrounding high valleys sent their most astute masters and their most knowledgeable students on a great pilgrimage to the villages. They were to ensure that in the future, their own culture would prevail in Shangri-La.

To begin, each player places seven different Masters of his color into the villages of Shangri-La. Throughout the course of the game, new Masters will be placed and will take on Students to learn their disciplines.

Once the time is right, the Students will journey across a bridge away from their Masters' village into a neighboring village.

If the village from which the Student came is stronger than the new village, then the Student may be placed under the watch of a new Master, or he may even become a Master himself, if there is no Master present in his discipline.

Whenever Students make such a journey, it will destroy the bridge on the followed path. At the end of the game, whoever has placed the most Masters of his color in the villages of Shangri-La will win!

Game board - The game board is placed in the middle of the table. It displays a mountain area with 13 villages connected by paths. Each of these paths connects 2 villages and has a break in the middle. In addition, each village has a group of 7 Master symbols.

To the right of the game board lies a village with red walls. In a 3- player game, this village is not used. At the beginning of the game mark this with a "Stone of the Wise Men".

Master tiles - Before the first game, punch out the tiles from the tile sheet. Each player takes all tiles of one color. In each color there are 6 sets of 7 different symbols denoting the 7 Master types. It is advisable for players to separate their tiles into groups by symbol so they will be easy to count during play.

Each player represents a clan of folk from the mountains of Shangri-La.

These four peoples are called:

The Masters of the mountain folk of Shangri-La are trained in 7 different disciplines: Rainmaker, Priest, Yeti-whisperer, Astrologer, Dragonbreeder, Healer and Firekeeper.

Each player has 6 Masters available to him for each of these 7 different disciplines.

To begin the game, players place 7 Master tiles of their color into villages of their choice, 1 for each of the 7 different Master types.

Players place one at a time, in clockwise order, until all are placed on the board. Master tiles may only be placed atop village spaces displaying the matching symbol. In addition, the following limit restrictions apply (in this initial phase only):

After the phase is complete, each player should have 5 of each type of Master left in his supply.

Setup for the first game

Strategy for the initial Master placement may not be apparent during your first game. Included on the reverse sides of the Rules Summary sheets are suggested starting positions for 3- and 4-player games.

By your second game, you can instead rely on good strategy and planning for the placement phase.

Whoever has last reached the peak of Mount Everest using nothing but blue and white checkered stilts carved from the wood of a Mammoth tree is declared the Starting Player. In case of a tie, the wisest player of the group begins the game.

The player whose turn it is always choosing one of the following three actions:

When a player chooses this action, he takes any one Master tile from his supply and places it on any open space of the matching symbol, in a village where there already lies at least one other Master of the same color.

By using this action, players may bring additional tiles onto the board. The active player may take any 2 tiles from his supply and place them atop 2 already-placed Masters of the matching symbol in any village on the board.

These placed tiles are called "Students". A Master may never have more than one Student at any time. The 2 Students may be placed in the same village or in two different villages.

If a player has only one Master eligible to take a student, he may still choose this action, instead placing only one student onto the board.

An important part of Shangri-La lies in the recruiting of these "Students". It is an important decision to determine when the right time and the right place to bring Students into the game.


3. The Journey of the Students

The "Journey of the Students" is a crucial element of the competition of "Shangri-La".

Important: Only through the "Journey of the Students" can a player spread his clan into the villages where he does not already have a Master.

Who may begin a Journey? - A "Journey" may be started only by a player who has at least one Student in the village where the Journey will begin.

When does a bridge break? - As soon as the "Journey of the Students" occurs, the bridge traveled across immediately breaks. The bridge is taken from the board and out of the game. There may no longer be any more Journeys across this path for the remainder of the game.

When is a "Stone of the Wise Men" placed? - A Stone is placed on a village if all its extending paths have been broken. No actions may take place in a village with a Stone in place.


When students journey from a village

One of two situations can occur:

Note: A village's "Strength" is determined by the total number of all tiles (Masters and Students) of all players (active player and opponents) present in the village.

Normally a player will perform a "Journey of the Students" action from a stronger village into a weaker one. Only in this case are Students able to displace rival Master tiles in the destination village.

If after a journey, a Student enters a village with an empty symbol space of his discipline, (for example, a Student Rainmaker encounters an empty Rainmaker space), simply place the Student in the open space - he has become a Master.

If after a journey, a Student enters a village with his matching symbol space occupied by a Master tile of his own color (for example, a red Student Rainmaker encounters a red Master Rainmaker in this space of the destination village), the Student is placed atop the Master tile, and the Student remains a Student.

If the Student enters a village where the symbol space is occupied by both a Master and a Student of his own color, then the journeying Student is taken from the board and returned to the owner's supply.

If after a journey, a Student enters a village with his matching symbol space occupied by a tile or tiles of another player (for example, a red Student Rainmaker encounters a Rainmaker of another color) then the opposing tile(s) of that symbol are removed from the board and placed back in the owner's supply.

If after a journey, a Student enters a village with an empty symbol space of his discipline, (for example, a Student Rainmaker encounters an empty Rainmaker space), simply place the Student in the space - he has become a Master, just as in Situation 1.

If after a journey, a Student enters a village with an occupied space of his discipline, (for example, a Student Rainmaker encounters a Rainmaker space occupied by a tile of his own or an opposing color), the Student is removed from the board and placed back in the owner's supply.

It is rather seldom that a player will choose to journey from a weaker village to a stronger one. Any player who chooses to take this path must be doing so as a finely calculated tactical play.

Example of "The Journey of the Students"

Player Red, who has 2 Masters and 2 Students in Village A, chooses the action "Journey of the Students". He has determined Village B to be the best destination for the Village A Students.


To conclude the Journey: Once the Students have traveled from Village A to B, the connecting bridge immediately breaks and is removed from the game.

Though Village A is the weaker of the two, Violet chooses to have the "Journey of the Students" from Village A to B - quite a wise maneuver!

Violet must be thinking: "I can sit here and wait until Village B journeys to Village A and knocks out 2 of my Masters - or, I can act first, and prevent that incident from ever happening".

And so it is done - Violet takes his only Student from Village A, the Healer, and moves it to the open Healer space in Village B, where it becomes a Master.

This isn't good news for the Red Student Rainmaker, however, as he is faced with an occupied Rainmaker space, and must be removed from the board.

The game ends when the last (twelfth) Stone of the Wise Men is placed on the board (One village in play will be left without a Stone).

Now the players count up how many Master tiles they have on the board - whoever has the most is declared the winner.

Ties are broken by the number of villages occupied by the tied players.

Note: Only the Masters are counted, not the Students.

For example: Player Red and Player Blue both have 17 Master tiles on the board. Player Red, however, has his Masters spread across 7 different villages, while Blue only occupies 6. In this case, Red is the winner. 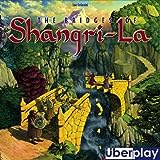 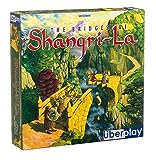 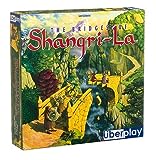