Be the first player to win three cards over a series of rounds by shouting out the most correct answers to the written topics.

Remove the scoring tokens from the box and scatter them face down in the center of the playing area. Place the box of cards within reach of all players.

That's It! is played over a series of rounds. Whoever most recently played "Tag" starts the first round by being the Reader.

The Reader draws a card from the box and reads aloud the first topic. (Each card has five topics).

All other players, without taking turns, should immediately shout out answers with the aim of being the first to say the "It" word, written on the right side of the card.

There's no penalty for shouting out wrong answers but as soon as the Reader hears the exact word - she should shout",That'sIt!" and point to whoever first said it.

Then, without looking, the Reader should hand a random face down scoring token to that player. In case two or more players said the "It" word at the same time, the Reader gives each a token.


Note: The values of the tokens should remain unknown until the end of the round.

The Reader continues reading off the next few topics and awarding tokens as above, until she reaches the last one, which is a bonus and worth two tokens to whoever gets it.


No one gets it

Usually someone will say the "It" word within 30 seconds. However, if the guesses fall to a silence, the Reader announces the word and collects one of the face down tokens.

After the bonus topic has been answered, all players reveal and add up the value(s) on their token(s). Whoever has the highest total wins the topic card, which goes into a face down pile in front of them.

In case of a tie, all tied players receive a card. (Take extras from the box). Start a new round by mixing up all the tokens back in the middle. The player to the left of the last Reader becomes the new Reader and draws a card from the box.

The game ends as soon as one player has collected three cards.

In case of a tie, place all of the tokens face down in the middle and have each player draw one. Whoever draws the highest number wins.

For a longer game, set a higher number of cards as the goal before playing.

That's It! & Tip of The Tongue Game Bundle 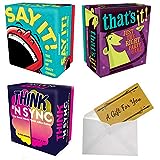