Link Tetriminos of the same color into groups of 3 or more to earn points. Block opponents from linking their Tetriminos. When the tower is full, the player with the highest score wins the game.

Attach feet to base of game tower before playing and remove feet before returning to the box for storage. Keep all packaging for future use and reference.

Each player chooses a color and takes all the Tetriminos in that color. There are 25 Tetriminos per color, 5 pieces of each Tetrimino shape.

The playing die has one Tetrimino shape or the TETRIS LINK logo on each of its 6 sides.

Players roll the die at the beginning of each turn. The Tetrimino rolled is the Tetrimino that must be played by dropping it into the tower.

Player 1 rolls the die and selects a matching Tetrimino from their color set to drop into the tower.

Tetriminos can be dropped into the tower in any direction and in any open space, but if a player leaves an empty space beneath their piece he/she will lose a point.

Rules of the Die

If a player's Tetriminos are blocked, those pieces are now out of play and the player must begin a new color group to start earning points. He/She will need to link 3 Tetriminos to begin scoring.

When a player links 3 Tetriminos he/she earns 3 points (1 point for each Tetrimino in the group).

Single Tetriminos or groups of two Tetriminos are not worth any points. Only Tetriminos linked to 2 or more other pieces of the same color are worth points.

After a player has linked 3 Tetriminos, each additional Tetrimino that is linked to the existing group of 3 is worth 1 more point.

When linking separate groups of 1-2 Tetriminos into one group, give yourself a point for each Tetrimino that is part of the new group of 3 or more pieces.

Do not give yourself points for Tetriminos that were previously added to your score.

If the starting player rolls the S/Z Tetrimino on their first turn, they will begin the game with a negative point.

If an empty space is created while also linking to 2 or more Tetriminos of the same color, account for both negative and positive points.

Players track their points using the score markers on the left and right side of the tower. Players use the markers that match their Tetriminos and slide them up and down to keep score.

Each time players earn or lose points, they must adjust their score marker to the appropriate point total.

Note the small recessed circles on each Tetrimino. Players can check their score by counting the circles in their Tetriminos. Remember, only Tetriminos that are connected to 2 or more other Tetriminos (of the same color) are worth points.

Also, remember to subtract points for any empty spaces.

The game is played until the tower is full and no more pieces can be added. Tetriminos cannot stick out the top of the tower.

When the game is over, the player with the highest score wins the game.

In the event of a tie, the player with the longest color link (the most pieces of the same color linked in any direction) wins the game!

The rules are the same for 2-player and 3-player games.

For 2-player games, players do not need to play with 2 sets of Tetriminos. There are enough pieces to play a 2-player game with one color. 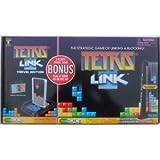 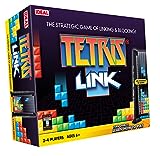