Just like grains of sand, desert cultures are not all alike. The Tuaregs are a great example: in these nomadic tribes, the men, or Targis, cover their faces whereas the women do not. As a matter of fact, Tuareg women, or Targia, play a very important role in their society, including being in charge of their household.

Numerous families comprise these tribes, which in turn are led by the nobles. In Targi, you are in charge of one of these tribes and your goal is to have the largest tribe. To attain this objective, you will need to trade local Goods (such as dates and salt) and imported Goods (like pepper).

These Goods will allow you to get gold and advantages that will allow your family to flourish. But the desert is a treacherous place, robbers and competing families are vying for the same resources. At the end of the game, the player with the most victory points will be the winner.

Before your first game, carefully remove the various pieces from the frame. Players should sit in such a way that they both can read the cards.

The 16 Border cards surround the play area and are placed as illustrated below (each card is framed by a red line in the picture below). The cards are placed in order, from 1 to 16, and are positioned in such a way that the small numbers are on the top left-hand side corner. Border cards never move during the game.

Note : Each Border card has two sides. On one side is a textual explanation of the effect of a given card. On the other is an iconic representation of the same effect. We recommend that, for your first few games, you use the side with the text. Eventually, when you are familiar with the various effects, you can flip the card on the side with the icons.

The Goods, gold and VP tokens are placed in a shared supply next to the play area. The Robber (gray figure) is placed above the #1 Border card (Noble).

The first player is the last player who has eaten dates. Otherwise, blue goes first. (The Tuaregs are sometimes referred to as the "Blue People").

Each turn, the players will place their 3 Targis on the Border cards, one Targi at a time and one player after the other. They then place their 2 Tribe markers on the intersections "drawn" between 2 Targis of the same color. Once the markers are in place, players can carry out the actions of the cards on which their figures and markers stand.

Through clever placements, a player will be able to collect many victory points. The game ends after a player has acquired his 12th Tribe card and placed it in his play area or when the Robber reaches the last Border card, #16.

At the beginning of a turn, the Robber is moved clockwise onto the next card in numerical order. For the first turn of the game, the Robber is placed on the Noble card. Players cannot place a Targi on the card occupied by the Robber. When the Robber reaches a corner card, a Raid takes place where the players lose Goods, VPs or gold (see the Raid section).

Starting with the first player, players place their 3 Targis, one Targi at a time and one player after the other. Each player can occupy 3 Border cards with his Targis during a game turn. Targis may not be placed on the following cards:

Finally, both players place their third and last Targi:

3. Place the Tribe markers on the intersections (9 central cards)

Once both players have placed their 3 Targis, they place their 2 Tribe markers. To accomplish this, a player traces an imaginary line that originates from each of his Targis. On each card where 2 of his lines create an intersection, the player places 1 Tribe marker. In most cases, players will place 2 Tribe markers.

Note: If a player has placed 2 of his Targis on two cards in the same row or column, this will not create an intersection. In such a case, the player will only place 1 Tribe marker.

Example (cont).: Players place their Tribe markers on the cards at the intersections of their Targi figures.

Starting with the first player, each player takes all of his actions obtained with his Targis and Tribe markers. The order in which a player takes his action does not matter. However, an action must be totally completed before starting another one.

A player is allowed to pass on any given action, whether it comes from a Targi figure or a Tribe marker. As soon as a player has completed the action of a Border card, he takes back the Targi that was placed on it. The Border card stays where it is.

Note: As soon as the Goods card pile is empty, shuffle the Goods discard pile to create a new draw pile.

Note: It is possible to run out of a certain kind of token in the supply; in this case, simply use a piece of your choice (a penny, a date, a salt packet, etc)..

The Tribe cards are placed in front of the player. To play a Tribe card, the player must pay its cost using Goods and/or gold.

A Tribe card kept in hand may only be played on a following turn with the Noble action (Border card #1). To play the card, the player must also pay its cost. (Exception: One of the Tribe cards allows its owner to play a Tribe card from his hand without using the Noble action).

Instead of placing a new Tribe card, the Noble action also allows a player to discard the Tribe card kept in hand, thus freeing his hand for a better card.

At the end of the turn, when both players have finished their actions, the central face-down Goods and Tribe cards are turned face-up. The first player gives the amulet to the other player who becomes the new first player. A new turn begins by moving the Robber.


Other rules and information

The cost of a Tribe card is indicated in the upper right-hand side corner.

Note: Some cards show a stroke between Goods and gold: the player chooses to pay with Goods or gold.

The lower right-hand corner of the Tribe cards show the number of VPs they give (1, 2 or 3).

Players build their display with the various Tribe cards they collect. A player's display can hold up to 3 rows of 4 cards each. In each row, cards are placed from left to right, but a player does not have to complete a row before starting a new one.

Thus, each player can fill many rows at the same time. Once a Tribe card is placed in a player's display, it stays there until the end of the game.

Exception: One of the Tribe cards lets a player move 2 laid out cards; however, the player may not leave any gaps after moving his cards.

Tribe cards are divided into 5 symbols:

If a player completes a row of 4 cards with the same symbol, he scores an additional 4 victory points at the end of game.

Gold is not considered a goods.

When the Robber is on a Raid card, players must pay what is shown on the card.

Beginning with the first player, each player must choose to lose either Goods (Gold on the last Raid card) or victory points. Losses are returned to the supply. The Robber then moves onto the next Border card and play continues with the next turn.

Players are limited in the number of Goods and gold they can carry from one turn to the next. Each player cannot keep more than 10 Goods and/or 3 gold at the end of a turn. Any excess tokens are returned to the supply.

Players choose the Goods they discard. Please note that during their actual turn, players are not limited.

Hint: Use the Merchant and Silversmith Border cards or play Tribe cards to ensure that you do not exceed the Goods and Gold Limit and thus avoid discarding Goods or gold.

The game ends at the end of a turn where at least one player filled his display with 12 Tribe cards. If this occur during the first player's turn, he finishes his turn, and then his opponent also finishes his.

The game ends at the latest when the Robber reaches the 4th and last Raid card. In this case, the players must still pay 1 gold or 3 VPs, and the game ends immediately after.

Players then proceed with the final scoring during which the players count their VPs (VP tokens and victory points from their Tribe cards).

Finally, players check to see if they score the bonus points for rows with the same symbol or for four different symbols:

Example: Blue placed his twelfth Tribe card, indicating that the game ends after this turn. He has 3 VP tokens (each of value 1). He receives 21 victory points from his Tribe cards. He also gets these points for the 2 circled cards (shown above): 1 VP for having 2 Well cards and 2 VP for the rightmost Camel Rider card.

Summary Of The Example: 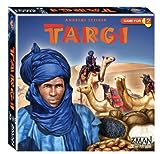 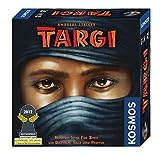