Whenever tiles touch, the colors of the connecting links must be of the same color - they must match! "Match" is the golden rule of Tantrix.

A gobble is a space around the Tantrix surrounded by three or more tiles. A tile placed into a 3-sided space is 'gobbled'. Gobbles are also known as 'forced spaces'.

A line of one color which passes through the tiles and eventually curves back to join itself is called a loop. Loops do not have to be perfect circles! They can be of any shape, no matter how irregular.

The connected group of tiles already played on the table is often referred to as 'the Tantrix'. The name Tantrix itself is derived from 'Tangled Tracks'.

Tantrix Gobble is a family game which is more about speed than strategy.

It suits fast, rather than deep thinkers and is a fun introduction for younger players.

The optimum number of players will depend on how much chaos you can take: more than 4 players and elbows definitely become a factor!

What Is A Gobble?

A gobble is a space in the Tantrix surrounded by three or more tiles.

In the diagram you can see two gobble spaces (A and B) and one tile that could fit at A.

The aim of the game is to make the longest possible line (or loop) of your chosen color.

The game can be played by two, three or four players.

While games with three or four players are more interactive, the two-player version is more skilful and is always used in tournaments.

Each player chooses a color: red, yellow, green or blue. All colors are present in equal quantities, so no color has an advantage over another. Regular players often develop a preference and can find it hard to switch.

All the tiles are placed in the bag. Each player takes a hand of six tiles at random. The tiles are turned face up in front of each player and need to remain visible to the other players throughout the game.

The player with the highest number starts, placing any tile from their hand into the center of the table. Players then take turns adding tiles, following the basic rules.

Start your turn by looking for gobbles that have not yet been filled. Fill them if you can. Pick up a replace- ment each time you play a tile. Filling one gobble often creates another, which must also be filled if possible.

Select one of your six tiles and play it anywhere you like, provided you obey the basic rules and the three restraints (see page 16). It is a good idea to test your free move, and any gobbles it creates, by placing a tile close to the Tantrix.

Once it touches the Tantrix the move is confirmed. Do not forget to pick up a replacement tile.

Before your turn is over, check your tiles again in case you can fill any gobble spaces, including gobbles created by your free move. Remember to pick up a replacement each time you play a tile.


Tip: Spotting tiles that can be gobbled

If at first you find it hard to see which tiles fit gobbles, don't worry, you are not alone. But if you stick with it, we promise that spotting gobble tiles will quickly become second nature!

One way to practice, is to say "out loud" the colors of the gobble space in a clockwise direction, for example: red-blue-ye llow.

Then keep this sequence in mind, as you scan your tiles to look for it.

There are three moves - called restraints - which are not allowed as long as tiles remain in the bag. Once all tiles are drawn, the restraints are lifted.

If your game starts to have gaps or holes in the middle of the Tantrix (as often happens during Tantrix Gobble), you probably have not obeyed the three restraints correctly.

An easy way to learn the rules is to play Tantrix online, where gobbles and restraints are done for you.

Whoever removes the last tile from the bag announces "bag empty" and the three restraints no longer apply. This final period of play is called the endgame.

Players must still obey the basic rules, but they now can create gobbles with three links of the same color, double gobbles and place tiles along controlled sides.

Only one line or loop per player counts. For example, a loop of 12 tiles means a score of 24 points, which wins over a line of 23 tiles.

Start by sorting the tiles into piles according to the colors of the numbers on the back. There are 5 different puzzles, described below in order of difficulty.

The Green and Yellow puzzles are loop puzzles just like Tantrix Discovery, and the White puzzle is similar to the Xtreme set (sold separately), for which no color clues are given.

The Blue and Red puzzles are pyramid puzzles and extremely challenging. Good luck!

With pyramid puzzles, all tiles must be formed into the designated pyramid shape. The Blue and Red Rainbow puzzles both are "Line pyramid" puzzles. 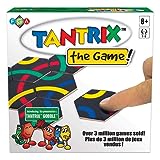 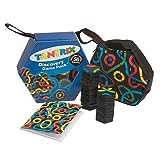