In all sumoku games, tiles must be arranged in a crossword- style pattern such that each row and column adds up to a multiple of the key number. The key number is the number rolled on the die.

The created pattern itself is called a sumoku. In all sumoku variations:

In sumoku, the object is to get the highest score. Players collect points by arranging tiles in rows and columns which add up to multiples of the key number.

All players contribute to one common crossword-style pattern in the middle of the playing area.

Have a pencil and paper ready to keep score. All players draw 8 tiles from the bag and turn them face up in front of them.

Each player adds up their 8 tiles. The player with the smal- lest total rolls the die. The number shown on the die (a 3, 4, or 5) is the key number for the entire game. The die is rolled only once in a game.

The player who rolled the die places a single row or column that adds up to a multiple of the key number in the middle of the table and scores the total of the tiles.

Important: A color cannot repeat in the same row or column. A number may repeat.

In this example, you add 5 to an existing combination and you score 15 points.

Then resupply your stock by drawing as many new tiles as you just used.

In turn, players can:

Bonus: Each time you create or complete a line of 6 colors you play again without drawing new tiles. Then add both totals and resupply to 8 tiles.

The game continues until there are no tiles remaining in the draw pile and all players have played as many tiles as possible.

At the end of the game, the numerical value of any tiles remaining in a player's stock is deducted from that player's total.

Strategy tip: To get a lot of points out of 1 or 2 tiles, complete existing rows or columns. 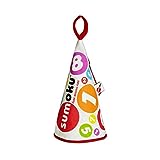 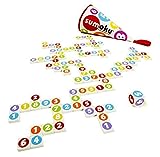