Maneuver your Sumo hamster using a magnetic wand and try to knock your opponents out of the ring. The first player to win five matches wins the game.

If the Sumo hamsters are unassembled, put them together by matching up the "body" and "feet" sections according to the color of the belts. Guide the tabs of the feet section into the body and twist it to the left to lock into place.

Each player chooses a Sumo hamster and places it in a "home base" at one corner of the board. (Note: In a two-player game, place the other two hamsters in the other two corners).

Place a scoring peg that matches the color of your Sumo hamster's belt into the left-most hole behind its home base. Remember, the next player to roll the die is the one to the left of the player who most recently rolled the die (not necessarily the player who won a match).

Place the magnetic wands, food pellets, and action die within reach of all players.

Note: For enhanced play, replace the food pellets with 40 pennies or nickels from around the house.

The player who weighs the least goes first and takes the Champion's (red) wand. On your turn roll the die and take one of the following three actions, depending on the side that lands face up:

The first player to win 5 matches is the Sumo Ham Slam Grand Champ!

how to remove food pellets from the hamsters

To remove the food pellets, simply turn the hamster upside down and twist the feet to the right to unlock and remove the bottom section. 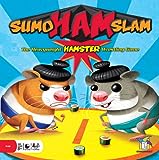