Strasbourg in the 15th century. The city's fortunes are powerfully influenced by the craft guilds who occasionally even occupy the majority of seats on the city council.

You take on the roles of the city's ambitious families. Your goal is to get your own family members admitted to the guilds. Only the clever use of Influence Points will make it possible for them to be accepted as an Apprentice, Journeyman, or even a Master-provided that you have the money for the appropriate entrance fees on hand. But never underestimate the power of the Nobility and the Church!

On the top half of the Board you'll find the Council of the city. On the Council, there are 8 Seats which your family members may occupy.

The Nobility and the Church each are entitled to one seat on the council (top row).

Whenever in the course of the game, a player places a Family Member on one of the Council Seats, return the Family Member who had previously occupied the Seat back to the appropriate player.

Each player chooses a Player Color and takes the 15 Family Members and 24 Influence Cards of that color. Shuffle your Influence Cards and place them face down as a deck in front of you.

In addition, each player receives 1 Summary Card, 1 Screen, and Coins of a total value of 5, which you place behind your Screen. The leftover Coins, as well as all the Goods, Privileges, and Chapels are placed in a common pool.

Place the cards you keep behind your Screen. You may keep the number of cards you have secret as well. Place cards you want to discard back in the box. Tasks you fulfill bring Prestige Points at the end of the game; unfulfilled tasks lose you Points.

Tip: Family Members, Coins, Goods, and Privileges are in theory unlimited in availability. Should the very rare case arise that the included game materials are insufficient, please add coins, dice, gummi bears, or other suitable tokens.

A game proceeds over 5 Rounds. Each Round is divided into 3 Phases which follow one after the other:

For a brisk game, we recommend that all players resolve the Planning Phase simultaneously. If, however, going in order is important to you, begin with the Starting Player and have the other players follow in clockwise order.

The Planning Phase has 2 Steps. In the first Step, you decide the number of Influence Cards you play this Round. Draw the top Influence Card from your deck and look at it.

Now decide card-by- card if you want to draw another card from the deck or if you wish to stop. You may not put drawn cards back in the deck. You may draw as many cards as you like from the deck, but remember that the deck must last for all 5 Rounds!

As soon as all players are done, the Planning Phase ends. From now on, you may inspect your Stacks any time, but you may no longer change the compositions of the Stacks.

Example: Nicole first draws a 5, then a 2, and then another 2. She chooses not to stop and draws a 3. She wants more, so she draws a 6. After a brief consideration, Nicole decides to stop. She has 5 Influence Cards in her hand.

Then Nicole divides her cards into 4 Stacks: the 3 and one 2 she puts together in one Stack, and the other 3 cards she puts down alone as their own Stacks in front of her. She could also have built a three-card and a two- card Stack or a five-card Stack, or five one- card Stacks, etc.

The Action Phase consists of 9 Steps which are depicted on the Round Cards with the spaces A through I.

The Round Marker indicates which Step is currently active. At the beginning of this Phase is Step A. As soon as you resolve one Step, move the Round Marker one space down, and conduct the next Step.

When you have finished Step I, put the Round Marker on Step A of the next Round and end the Action Phase. Below, the Steps are explained more precisely.

The first 7 Steps A-G all proceed identically. They only differ from each other in their effects.

The Starting Player begins. He has the choice to either turn over one of his Influence Stacks or to pass. He may freely choose which of the Stacks he cares to turn over. Then the other players follow in like fashion in clockwise order. After each player has had one turn, determine your order of precedence based on the sums of the Influence Points that you have turned over.

Whoever has turned over the most Influence Points occupies 1st Place, the player with the second-most Influence Points 2nd Place, and so forth. In the case of a tie, the player sitting closer to the Starting Player (in player order) gets precedence. The Starting Player wins all ties in which he is involved. Anyone who has passed, goes out empty-handed and may take no action in the current Step.

After these Actions, place the Influence Cards turned over back in the box.

Exception: If someone who turned over an Influence Stack is not eligible to take an Action, he may take exactly 1 Card from that Stack and place it at the bottom of his Deck. The rest of the cards go back in the box.

Any Influence Stack not brought into play by the end of the round is put in the box unused.

Example: In a four-player game, in Step B, the players can influence the Vintners' Guild. Nicole (orange) is the Starting Player. She turns over a Stack with one card with the value 5. Nicole is therefore employing 5 Influence Points in this Step. To her left sits Peter (black) who turns over a Stack of 2 cards with a combined value of 3. Sandra (yellow) follows; she first considers passing but then decides to turn over a Stack worth 5 Points. Finally, it is Thomas's turn (green), and he turns over a 6.

The order of precedence is determined: with 6 points, Thomas is in 1st Place. With 5 Points each, Nicole and Sandra are even, but Nicole is better situated as the Starting Player and takes 2nd Place. Sandra lands in 3rd Place and Peter in 4th Place. Thomas takes the Starting Player Marker. In Step C, he must first decide how many Influence Points he is employing.

Thereafter, Thomas, Nicole, and Sandra conduct their Actions. (For which, see the following examples). Peter sits the Step out, placing his 2 at the bottom of his Deck and the 1 in the box.

Influence the Nobility & Church A

The player in 1st Place places 1 Family Member on the Nobility's Seat of the Council.

The player in 2nd Place places 1 Family Member on the Church's Seat of the Council. The players in 3rd and lower Place sit out.

Influence a Guild B D F

The player in 1st Place may place a Master in the appropriate Guild, the player in 2nd Place a Journeyman, and the player in 3rd Place an Apprentice. All the remaining players sit out.

Exception: In a three-player game the Journeyman is omitted! That is, the player in 2nd Place may place an Apprentice, and the 3rd Place player sits out.

As a Master, you may perform 3 different actions:

As a Journeyman, you may perform 2 different actions:

Example: Nicole is in 2nd Place and may install a Journeyman. She takes one Goods Tile with a cask out of the pool and places 1 Family Member on a different field than Thomas, paying 3 or 4 Coins to do so, depending on which space she chooses.

As an Apprentice, you may perform 1 action, choosing one of these two options:

Example: Sandra is in 3rd Place and may install an Apprentice. She decides not to place 1 Family Member in the City, deciding to take a Goods Tile.

The player in 1st Place may sell as many Goods in his possession to the Merchants as he cares to. To do so, he places the Goods back in the pool and receives in return the value printed on them in Coins from the pool. All other players sit out.

Note: In Step G (not in C or E!) the player in 1st Place additionally places 1 Family Member on the Merchants' Council Seat.

Example: Later in the game, Nicole has accumulated a few Goods behind her Screen: 1 Weapon, 1 Cask, and 1 Shoe. She succeeds in playing the most Influence Points with the Merchants. She places all 3 Goods back in the pool and takes 12 Coins in total for them.

The player whose Family Member currently occupies the Church's Seat on the Council takes 1 Chapel from the pool and places it on any open white, round space of his choice in the City.

Example: One of Sandra's Family Members occupies the Church's Seat, therefore Sandra may build a Chapel in this Round. She places the Chapel so that it is directly next to two of her Family Members.

The player whose Family Member currently occupies the Nobility's Seat on the Council takes this round's Edifice and places it on an open building space of his choice. The building spaces are the 7 empty spaces in the City.

Example: One of Thomas's Family Members occupies the Nobility's Seat (see at left), so Thomas may build an Edifice this Round-an Inn. He places the Inn so that two of his Family Members are standing directly next to it.

Peter goes first, turning over an Influence Stack, and Sandra Passes. It is Thomas's turn again, and he gives up another Privilege. Nicole has to go next, as she is out of Privileges and must now decide how many Influence Points to play before Thomas.

Privileges may be employed in later Rounds. During one of the Steps from A to G in the Action Phase, you may give up 1 Privilege instead of deciding whether to turn over an Influence Stack or to pass. You sit out your turn without passing, and after all the other layers have decided, you receive an additional turn. In a given Phase, as many Privileges may be played as you like.

The game ends after the 5th Round. Now you receive Prestige Points for a variety of things:

You cannot fulfill Task Cards during the game, but only at the end of the game. You will find an exact description of all the Task Cards on the included Summary Sheet.

The player with the most Prestige Points wins the game. In the case of a tie, the player with more Family Members in the City wins. If this is also tied, there is more than one winner.

Example: Peter (black) receives 2 Prestige Points for his 2 Family Members. The Chapel gives him 1 more Point. He receives 4 Points for the Inn. 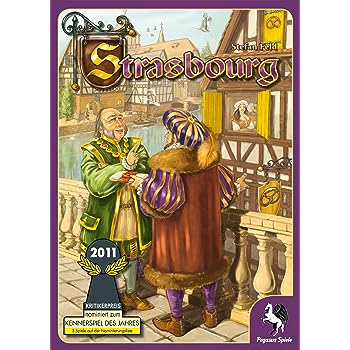