One player rolls the dice. When the dice stop, all players play at the same time. Put your hand on the right die!


You can put both of your hands on dice, but you can only touch one die with each hand (even if two dice are close together!).

Once you put your hand on a die, you cannot move it!

If two or more players touch the same die, the one who touched it first gets the points (the player whose hand is directly on the die).

After everybody has a chance to touch the dice, it's time to score points!

Remember: You don't take turns - it's all about being as fast as you can! Use the colored beads to keep track of your score. Each bead = 1 point.


You can't lose points you don't have.

Pass the dice to the next player, who starts a new turn by rolling them.

The game ends when any player has 10 or more points: the player who has the most points wins!

For Experienced Players: the U-turn

If the dice show a pair (such as 2 2 5) all the rules reverse! In other words: place your hand on the red die if it shows the lowest number. 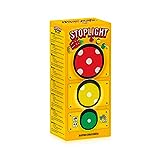