Stack-O-Saurus is a card game where you stack one dinosaur on top of the other until you have created a big Dino Tower!

It may sound silly but this game is a perfect balance of strategy and fun. Be the first player to complete your Dino Tower and you win!

Be the first player to complete the Dino Tower determined at the beginning of the game, by playing a sturdy Apatosaurus followed by four dinosaurs in order.

A Dino Tower is created using cards from the deck.

The Dino Tower must:


Each card is placed slightly over the card below it so the dinosaurs are right on top of one another.

We suggest the youngest player gets to choose the order of the Dino Tower. The Dino Tower is laid out in sequence for all players to see and reference throughout the game.

Shuffle the remaining cards and deal three to each player. Each e holds his cards in his hand; out of view of the other players.

Each player holds his cards in his hand; out of view of the other players. The remaining cards are placed in a pile, face-down, within reach of all players. This creates the draw pile. The top card is flipped and placed face-up to create the discard pile.

Play starts with the youngest player. Draw one card from either the draw pile or the discard pile. After drawing a card, play one card:


If you cannot play, discard one card onto the top of the discard pile. Play moves to the left (clockwise).

Once all players have started their Dino Towers by playing a black Apatosaurus, discard any extra Apatosaurus cards you have in your hand and replace them with cards from the draw pile.

From then on, if you draw an Apatosaurus discard it and draw another card.

The first player to stack the correct sequence of Dinosaurs to complete the Dino Tower wins! 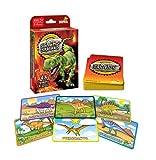