Earn Scoring Chips by building and identifying pictures that are created with Shape Cards.

Spread the Shape Cards, face-up, in the center of the table so that all cards can be seen.

New Players: Look at all of the Shape Cards and practice building pictures before beginning a game. Players usually find that they develop skills in constructing pictures, and identifying them, at a rapid rate. Just keep Squinting!

Choose one player to be the first builder. The builder will create a picture using Shape Cards. Remove the Squint Card Tray and Squint Die from the box and place them in front of the builder.

Decide which side of the Squint Cards, blue or green, to play. The level of play is the same for both sides. Place the cards in the Squint Card Tray so that the chosen color is facing the front of the tray.

The timer goes to the person to the left of the builder.

The player with the most Scoring Chips, after the as- signed number of rounds, wins the game!

If two or more players are tied for the win, they partici- pate in a tie-breaker. In a tie-breaker, only the tied play- ers guess the picture.

The person building the picture is the person to the left of the last builder. If that person is one of the players who tied, the role of builder moves to the next person who is not one of the tied players. The first player to correctly identify the picture wins.

For easier play, skip the timer and the die, and select whichever item on the Squint Card you wish to build.

For a more challenging game, skip the roll of the die and play only the level 3 words.

Scoring is done when the time runs out, with chips awarded for each item identified. The die is not used. 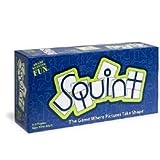