Spirits of the Forest Fan Site Official Site: Spirits of the Forest

Once an age, a mythic wind lifts the veil between the spirit world and ours. Whimsical seraphs, drawn to the vigor of an ancient forest, descend through clouds to once again take up their centennial game.

You are one of these seraphs - a being of great power and curiosity. The life of the forest fascinates you, and you eagerly gather plant, animal, and sprite alike to add to your mystical menagerie.

But beware, for you are not alone. Other beings just like yourself contest to collect the life of the forest as well!

In Spirits of the Forest, players represent the four elements that nourish the forces of nature. Up to four players compete to acquire the most (of nine different) spirit symbols, which are bound to a different element of nature.

Each turn, a player drafts up to two spirit tiles from the forest (a common pool of 48 spirit tiles), collects favor tokens, and moves, places, or recovers gemstones. Players continue taking turns until all tiles have been collected from the forest.

Spirits of the Forest Game Rules In Spirits of the Forest, players represent the four elements that nourish the forces of nature. Up to four players compete to acquire the most spirit symbols, as they score nature points for having the majority of each spirit.

The winner is the player with the most nature points at the end of the game.

The deck of spirit tiles represents the nine different spirits of the forest. Each spirit is associated with a unique color and a unique spirit animal. â€¦

Spirits of the Forest Solo Rules

In the solo variant of Spirits of the Forest, the player is competing against the game for the highest amount of nature points.

Setup for the solo variant is identical to the multiplayer game with the following changes: 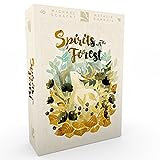 Spirits of The Forest