Get your ants safely to the finish. Use the spiders to interrupt the "cutie-crawlies" of the other players.

1) Place the ant racetrack on top of the empty inlay inside the bottom half of the box. Choose whether you would like to use the shorter or the longer ant racetrack.

2) Place an upright tree in each corner of the box bottom. The base of each of the trees fits tightly over the cardboard edge.

3) Place the spider web on top of the trees. Make sure that you can see the web from above, i.e. that you place it right-side up. Hold the spider web in its place with the help of the snap buttons.

4) Place Parker and Peter, the two spiders without a thread, close to each other onto the spider web.

5) Have the two magnets of Spinderella, the third spider, connect from below the web with those of Parker and Peter. If you do this right, the two spider brothers can now move around on top of the web and pull their sister below the web up as well as lower her down.

6) Now, pull Parker and Peter apart without lifting them up. Make sure that each of them is sitting on a red dot, exactly two dots apart from each other.

7) For each player, place three ants of one color onto start (the space with an arrow).

8) Place the tree bark on any space of the ant racetrack.

9) Put the three dice next to the game board, within easy reach of all

Whoever likes spiders the most begins the game. Then, take turns playing in clockwise order.

Roll The Dice And Move

If it is your turn, roll all three dice:

If there are a couple of ants sitting on top of each other, Spinderella (automatically) only catches the topmost one of them. That is as much weight as our fearless spider girl can carry!

Spinderella can also catch an ant that stops directly underneath her. Place the ant on the space underneath Spinderella and wait to see whether she attracts it (magnetically) or not.

Spinderella cannot catch an ant while the ant is only moving through and not stopping directly underneath her.

Have you and Spinderella caught an ant? Great!

The game ends when the third ant of the same color reaches the finish. If these are your three ants, you win!

If your third ant reaches the finish at the same time as the third ant of another player (through a piggyback ride), you share the victory. 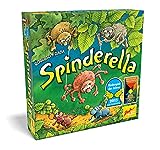