In a space station far from Earth, the naked mole rats, known for their exceptional ability to cooperate, are hard at work.

One morning their secure world is shattered when the alarm bells blare.

Snakes have infiltrated their space station and are on the loose! The mole I rats are at risk unless you can save them.

Can you and your teammates help the mole rats gather their emergency equipment and make it to the escape pod before time runs out?

Space Escape is a cooperative game. Players must work together to collect all four pieces of equipment and make it to the escape pod before any one of the following happens:

There are five tiers in the mole rats space station. Air shafts and ladders connect the tiers.

The only way for a snake or a mole rat to move from one tier to another is to climb a ladder or fall through an air shaft.

Mole rats and snakes never go down ladders or up air shafts.

Each mole rat has access to a medkit, which contains antivenom against one snake bite. The first time a mole rat is bitten by a snake, move the mole-rat back to its starting space and discard the medkit token to the box.

The anti-venom in the kit is used up! The mole rat continues playing the game. The second time a mole rat is bitten, the players lose the game.

Remove these 3 cards from the deck before playing the 2-player game. There will be 43 cards in the deck.


Moving in Either Direction

If your card instructs you to move a mole rat, choose a direction to move and move 1 space for each arrow shown on the card. Follow the instructions for the space on which you end your move.

Ignore any ladders, air shafts, other mole rats, and equipment that you move through on the way to your final space. DO NOT, however, ignore the snakes.

If a mole rat passes through a space with a snake, the mole rat gets bit and must go back to its start space. Each mole rat can only be bitten once. If one mole rat is bitten a second time, you all lose the game.

If all four pieces of equipment have been collected and all mole rats make it to the escape pod, you all win! 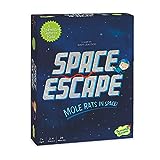