Players match wits in a race to come in last! Each round, one player chooses a category and acts as the host of the Party. On their turn, a player must give an answer that fits the current category. Wrong answers reap Penalty points. Correct answers are rewarded with the Smarty Pants!

At the end of each round, Penalty points advance players along the board. But the player holding the Pants gets to toss out one Penalty chip! The game ends when a player reaches Game Over... and last place wins!

Set the board in the middle of the table. The Penalty Chips and the Smarty Pants should be placed near the board.

Each player selects a color and takes the two pawns of that color, placing one on the Start space and the other in front of them as a reminder of their color.

The first Reader is the youngest player. He takes the Card Holder, Timer, and Wager Marker.

What the Reader Does

Take a List card from the box and place It in the card holder. Slide the buttons to cover the column of checkmarks.

As an item is guessed correctly, slide the button to the left to reveal the check-mark. If a Smiley face appears, tell that player to move back one space.

To begin the round, announce the Topic, and number of items in the List, and the Wager number (found inside the Yellow pants on the card).

The Reader makes his wager by setting the Wager Marker to either the green YES side or the red NO side.

At the end of the round, if the Reader's wager was successful, he will move his pawn one space backward on the movement track. If he fails his wager, he moves one space forward.

After making his wager, the Reader chooses one of the other players as the start player for this round. This player will make the first guess and play then proceeds clockwise.

If you are taking a long time, the Reader will start the timer. Now you have 15 seconds to guess or take a Penalty Chip. The Reader should not review guesses already given.

However, if you repeat a guess already made (right or wrong), you may guess again. The Reader Is the judge of whether a guess is close enough. Be fair! Note: If the wager number is reached, The Reader can start timing a player at any time.

The round ends either when all items on the List card have been successfully guessed or when the last Penalty Chip is taken. After the round ends, do the following:

The next Reader is the player whose pawn is farthest advanced on the board.

Note: the same player can be the Reader more than once in a row).

If there is a tie for furthest advanced pawns, the first tied player to the left of the Reader will be the new Reader.

If two or more players are tied at the end of the game, all tied players continue to play until the tie is broken (the player who reached the Game Over space should be the Reader). 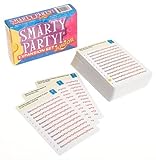