Tempest Tower is a mystical castle aloft in the clouds where fantastical creatures gather and play. But a storm is brewing and five enchanted friends must cross the clouds and return to their homes before the storm closes in.

Magical spells can help the team control the clouds but the magic is limited and the weather is unpredictable. The friends must work together to use the magic wisely before the shifting clouds prevent them from getting home.

Work together to help five enchanted friends get home before they run out of magic spells.

Every player starts their turn by rolling the die.

A. If you roll a number

Choose any enchanted friend and move them that number of spaces towards their home. Talk to the other players to help make the best decision on which character to move.

Note that enchanted friends cannot share a cloud space or pass over each other.

B. If you roll a Storm Cloud

Draw a Weather card and complete the action.

C. If you roll a Magic wand

A Magic Spell can be used immediately, or it can be saved for later by placing it face up in front of you.

Only one Magic Spell card can be saved at any time for all players. If you roll a Magic Wand and another player is already saving one, one spell must be used immediately or discarded.

If all 5 enchanted friends get to their homes (using either entrance) with Magic Spell cards left in play, all players win the game.

If the last Magic Spell card has been used and all characters aren't home, you've been beaten by the storm. 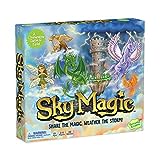