Legends say the guardians shaped the land and then entered a deep slumber. Now they've awoken, and the heroes of the Foxen smallfolk must defeat the guardians to win their rightful place in the world. The first battle in the war between the guardians and the smallfolk will take place in Skulk Hollow.

Everyone in Skulk Hollow knows the legends. The smallfolk recall the ancient times when the turbulent hours of creation coalesced into a tranquil world. They tell and retell stories of the guardians, who carried out the task of creation and then rested when their labors were complete. They celebrate the formation of the land and the birth of the civilized clans of the fox, the hare, the mouse, and the bear.

For generations, the smallfolk have puzzled over the crystal skeletons found among the occasional titanic artifacts and ruins hidden in the wooded world, from the highest peaks to the valley floor and into the caverns below the surface. Each discovery brings new questions, but none with answers.

But there are heroes who hear whispers in the wind, who feel the trembling in the ground. The sleeping guardians are waking. When they do, kingdoms will be crushed by their footsteps, unless the heroes rise to protect their homeland. Only by facing the guardians and climbing across their monstrous forms can the smallfolk hope to be victorious.

Over generations and generations the ancient woodland of Børe prospered and grew. The world was bestowed with great spirit, which lifted the animals of the land to new heights.

Unfortunately, over the years these clans lost touch with the spirit of the land and faction warring developed. The Foxen Kingdom of Skulk Hollow in the South, The spiritual Red Pandas of Cupboard in the North, the Mischievous Mice of Multon in the West, and the colony of Blackheart Bunnies in the East.

As skirmishes started breaking out across the continent, lives lost, there was a monstrous shake and then The Great Return. No one quite knows why, but the Guardians have risen - but not the kind, life-giving Guardians of spiritual legend. Dark, ferocious, versions that are now attacking all the kingdoms of the land.

In Skulk Hollow, two players take the roles of either a towering behemoth of a Guardian trying to eliminate the clans of foxes who have been causing havoc on the countryside, or a band of foxen heroes out to vanquish the evil beast that has been terrorizing the land and reunite the four kingdoms of Børe.

The Guardian wins the game by either eliminating the Foxen King, or by gaining enough Tribute.

The Foxen Heroes wins the game by eliminating the Guardian.

Skulk Hollow is a 2-player, asymetric, tactical combat game. Player use action cards to move their units, summon, and use special abilities. Taking down a guardian requires the Foxen player to leap onto the Guardian player board and take out different parts of the character. The guardian player wins the game either by eliminating the Foxen leader or by fulfilling the guardian's unique win condition. â€¦ 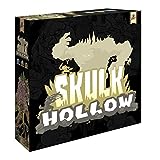