Each player takes a player shield. During the game, players keep their money and goods hidden behind their shields. All goods tokens are placed in the bag. Each player draws three goods tokens at random and places them behind his screen, without showing them to the other players.

Note: The fixed actions printed on the map next to some cities does not count toward the number of Action tiles assigned to those cities during set-up.

No Crook or Barterer may be placed on Aleppo or Tyre (the last two cities). If this should occur, remove them and replace them with new tiles at random or swap them at random with some tokens from a purple city.

The bidding for first turn movement can now start. VARIANT: For a change, you can play from Antioch to Chang'An, reversing the directions of movement, and placing purple tiles on the eastern cities and orange tiles on the western ones.

No Crook or Barterer tile may be placed on Lanzhou or Yumen (as per Aleppo and Tyre in regular game).

The other players can bid money to buy the caravan leader pawn from the player holding it.

Starting with the player on the left of the current caravan leader, and continuing clockwise once around the table, each player may pass or overbid the last bidder. No player can bid more than he owns and each player may only bid once.

If all players pass, the player who holds the caravan leader pawn keeps it for the next phase.

The player now holding the caravan leader pawn moves the caravan pawn in one of the possible directions, as indicated by the lines on the map.

Some cities (Dunhuang, Koria, Kashgar, Merv and Susia) have a special action tile symbol printed next to them. If the caravan is moved to one of these cities, the player holding the caravan leader has the opportunity to take this action as a bonus.

This newly selected player takes an action tile, a turn token and then gives the caravan leader pawn and remaining turn tokens to a player of his choice with no turn token before them.

With three players, 5 turn tokens are used, and each player can, therefore, play twice during the turn, the player who played only once receiving the caravan leader pawn in the end.

You may not pass the caravan leader to a player who has two turn tokens in front of them.

When the caravan reaches the end city, the game ends immediately.

In addition, the player with the most goods tokens in each color scores 2 points.If there is a tie, no one gets the points for those goods. 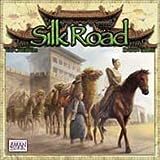