Shogi is similar to International Chess in that it is played between two players ('black' and 'white'), and that the object is to checkmate the opponent's king. Shogi is also very different from International Chess (hereafter called simply Chess). Here are a few of the differences:

The bulk of what follows describes the usual 9x9 form of shogi...

The board is 9 'squares' by 9. In fact, the 'squares' are slightly larger in the vertical direction than the horizontal. The circular points are to mark promotion zones and to enable you to visually divide the board up easily.

The letters and numbers are for notational purposes - eg: the top right square is 1a, the bottom left is 9i, and so on. As we will see later, black plays 'up' the board, and white plays 'down' the board.

Shogi pieces are usually wedge-shaped and pointed. There is no difference between blacks' pieces and whites because captured pieces need to be able to be re-entered after capture.

In the actual game, the direction in which a piece points indicates which side it is on. The pieces are identified with (usually) two Japanese characters. It is usual in diagrams to show only the top character.

In what follows, the moves of the pieces are described as if the piece were 'black', ie: playing 'up' the board. To get the move for the white move, simply rotate all directions (and the piece!) through 180 degrees.

Each player has 1 king. The king is the most important piece on the board in the sense that the object of the game is to checkmate the king in the same manner as in International chess.

The king occupies the center of the first rank, ie: black's king is on 5i, and white's is on 5a. The king may move 1 square in any direction like the king in chess, that is, one square in a n, n-e, e, s-e, s, s-w, w, n-w direction. The king does not promote.

Each player has 2 golds. The golds occupy the 2 positions either side of the king, ie: black's golds are on 4i and 6i, and white's are on 4a and 6a. The gold moves one square in any direction except the two rearward diagonal squares, that is, one square in a n-w, n, ne, s, w, e direction. The gold does not promote.

Each player has 2 silvers. The silvers occupy the 2 positions either side of the golds, ie: black's silvers are on 3i and 7i, and white's are on 3a and 7a. The silver moves one square in any direction except orthogonally left, right or backwards, that is, one square in a n-w, n, n-e, s-w, s-e direction.

The silver may promote to gold once it has entered the promotion zone and the promoted silver looks like this:

Each player has 2 knights. The knights occupy the 2 positions either side of the silvers, ie: black's knights are on 2i and 8i, and white's are on 2a and 8a.

The knight moves one square forward and then one square diagonally, left or right (ie: a restricted form of the knights move in Chess), that is, one square n followed by one square n-w or n-e. Pieces on the intervening squares are ignored. The knight is the only piece which may jump other pieces in this way.

The knight may promote to gold once it has entered the promotion zone and the promoted knight looks like this:

When it enters the opponent's promotion zone (the furthest away third of the board), the lance may promote to gold if desired and the promoted lance looks like this:

Each player has one bishop which occupies 8h (black) and 2b (white) at the start of the game. The bishops move is the same as that in Chess - any number of squares in any of the diagonal directions, that is, n-w, n-e, s-e, s-w.

The bishop may promote and acquire the extra power to move one square only in any of the orthogonal directions, that is, one square n, e, s, w. The promoted bishop looks like this:

Each player has one rook which occupies 2h (black) and 8b (white) at the start of the game. The rooks move is the same as that in Chess - any number of squares in any of the orthogonal directions, that is, n, e, s, w.

The rook may promote and acquire the extra power to move one square only in any of the orthogonal directions, that is, one square n-e, s-e, s-w, n-w. The promoted rook looks like this:

The pawns occupy the third rank on each side. Each player has 9 pawns to start with. The pawn moves one square forward, that is, one square n.

When it enters the opponent's promotion zone, the pawn may promote to gold if desired. The promoted pawn looks like this:

This would seem a useful place to introduce the Shogi notation scheme. The most useful scheme is probably that which is part descriptive, part algebraic. In this scheme, a piece is named and the destination square named also. For example (referring to the starting setup), P-7f.

Capture is indicated by a 'x', eg: Px1c - note the captured piece is not explicitly named in the notation.

When a promoted piece is subsequently moved, it is prepended with a '+', eg: +P-2b.

Strictly, if a piece does not promote when it could, an '=' should be appended to the move, eg: Px1c=.

The object of the game is as in western chess to checkmate the opposing king. Check in general is given by threatening the king with capture.

Checkmate is achieved when the king cannot escape. A game may end in two other ways - a player may resign if their position is seen to be hopeless, or, a draw may occur. This is rare in shogi. There is no stalemate in shogi.

Shogi is a game for two players ('black' and 'white'). In diagrams, black traditionally plays up the board, white 'down'. Black plays first.

Moves of the individual pieces are described elsewhere, but (fairly obviously) a player may not move a piece onto another square if it is already occupied by another of that player's pieces.

If the square is occupied by a piece belonging to the other player, the move is legal and the other player's piece is captured. Once a piece is captured, it reverts to its unpromoted state (see below for details of a promotion), and is retained by the capturing player, who may drop the piece as an alternative to a move (see below for details of drops).

With the exception of the knight, no jumps are allowed in any move.

Most pieces (pawn, lance, knight, silver, rook, bishop) may be promoted on reaching the promotion zone (the furthest away three ranks of the board). Pieces are promoted by turning them over so that their promoted characters are visible.

Pawn, lance, knight, and silver promote to gold. Rook and bishop have their powers enhanced by being allowed to move one square in a diagonal (rook) or orthogonal (bishop) direction. Note that promotion is not mandatory, and there are some strategic situations in which it may be disadvantageous to do so.

Note, however, that when a piece would no longer have a valid move after the current one, it must promote - that is, when a lance or pawn reaches the last rank, or when a knight reaches either of the last two ranks.

A player may elect to 'drop' a captured piece instead of moving a piece. This is one of the features which makes shogi so different from chess.

Basically a piece may be dropped anywhere with the provisos that:

In Japan, players are graded. There are in fact two grading systems, one for professional and one for amateur players. The amateur scheme goes from about 15 kyu (beginner) to 6 dan. An amateur 6 dan is about equal to a professional 4 dan.

Shogi allows for a handicapping scheme when the difference in grades of the two players is known:

If the same game position occurs more than three times in a single game, the game is declared a no-contest. The same position means, same players turn, same disposition of pieces on the board and in hand.

If a repeated position occurs as a result of repeated checks, the player giving check must not do so a fourth time otherwise that player forfeits the game. 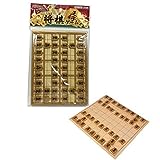 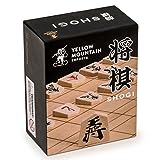 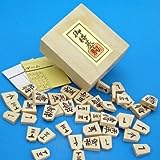