A Wizard is generally a solitary, irascible, megalomaniacal character with a bad temper. Whenever two wizards meet over a bridge (one of those bridges across a lava river, quite easy to find in the wizards realm), it will probably end as a merciless duel. An Armageddon-sized magic duel!

Here you are, then. One of most powerful wizards in the realm. THE most powerful one, according to your own opinion. Your aim is to push you opponent backwards, using a magical Fire Wall, until he falls in the lava river.

By cunningly managing your Mana power, and using your special magic tricks, you might be the one who survives. But beware: under the pressure of your magic assaults, the bridge is starting to collapse...

The board is set so that each opponent is at one end of the bridge.

The FireWall is on the middle division of the bridge, each player puts his wizard on one of the special marks on the bridge, three steps away from the Fire Wall (two empty flagstones between the Fire Wall and each wizard).

The Mana tokens are put on the "50" box of the Mana reserve.

Each player takes his Disc and his 15 cards deck, puts the "false card" apart, shuffles the deck, and puts it in front of him to figure his own personal stock. He draws five cards, takes in hand the "false card" too.

He looks at his hand without revealing it to the opponent. The "broken flagstones" tiles are kept aside for now.

A match consists of several rounds. For each round, each player has 50 Mana points to spend trying to push the FireWall towards the opponent.

At once the Fire Wall arrives on the flagstone where a Wizard stands, the round is over.

The loser (the one hit by the Fire Wall) must then move 3 steps backwards and the winner 3 steps forwards so that they are 3 steps away from the fire (two empty flagstones between the Fire Wall and each wizard).

At each extremity of the bridge, a new flagstone collapses, and a new round takes place with 50 Mana points.


How do I Move the Firewall

On every turn, Each opponent bets secretly, using the Disc, any amount of his remaining Mana. He must bet at least 1. At the same time he must decide whether he will play one or several cards, by putting them in front of him, front side hidden.

When each opponent declares being ready, both will reveal their bets, plus the spell cards they played on that turn. The power of each opponent's attack, which is equivalent to the mana he bet, is evaluated by applying the effect of the "spell" cards.

Eventually, if one attack is stronger than the other, the winner will push the Firewall one flagstone toward the opponent (ONLY ONE FLAGSTONE, no matter how much was the balance).

Once applied, the cards are discarded, in a distinct discard heap for each player. So each opponent has 14 spells to cast in the whole match (unless special effect specified by the spells).

Each opponent must cut off his bet from his Mana reserve on the board, by moving his token accordingly. And a new turn takes place!


What if several spells are played on the same turn

Whenever both players have played the same spell(s), the identical spells cancel each other out: they are discarded with no effect.

When several different spells are played on the same turn, the order to apply them becomes important: the whole spells played by both sides must be applied by following their numbering (top left of the card).

This because the spells interfer, and different orders could lead to different results.


Running out of Mana

When one player runs out of Mana points, he can't cast spells anymore. The other player can move the Fire Wall toward the opponent one step for each Mana point he still has in reserve, until it reaches the unlucky one.

As soon as the Firewall reaches a wizard's position, (or if both players have run out of Mana points, see above), the round is over.

The Firewall stays on the division it reached at the end of the previous round, and the wizards set themselves 3 steps away on each side. Both Mana tokens are back to the 50 Mana points division.

Each opponent draws three more spells from his remaining stock and adds them to his hand, unless the stock has run out, of course. And there goes another round.

You can decide that each player starts with the full deck of spell cards, instead of drawing some at each round.

There is more tactics then, but inexperienced Wizards will tend to spend ages reading every Spell explanation!

Instead of shuffling the Spell cards before the game, you put them in whatever order suits you! (you will then draw the first 5 Spells to start with, and draw 3 more with each new round, as in the normal rules) 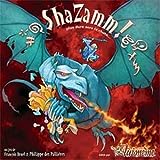