The theaters of London are abuzz. In one week, her majesty the Queen will attend their new shows and will grant her support to one of the troupes.

It's the chance of a lifetime for the young authors who are inflaming the populace with ever more audacious and motley plays. But how do you create a masterpiece in such a short time? Whoever has the answer to this thorny question will probably enter the rolls of history!

In Shakespeare, the players have 6 days to create the most grandiose play possible. They must recruit actors and craftsmen, put up stage sets, create costumes, and perform rehearsals.

At the end of 6 days, the player who has created the most prestigious play wins the game.

The main board is placed in the middle of the table. The Day token is placed on space 1 of the day tracker. The coins and the "+3" tokens are placed next to the main board.

Randomly draw three elements from each bag per player (12 with 4 players, 9 with 3 players, and 6 with 2 players) which are placed on the main board, in the areas reserved for them.

The Characters are shuffled and made into a deck. Draw two more cards than the number of players from the deck (meaning 6 cards with 4 players, 5 cards with 3 players, and 4 cards with 2 players). These cards are placed (face up) next to the main board.

Draw again from the deck two more characters than the number of players (meaning 6 cards with 4 players, 5 cards with 3 players, and 4 cards with 2 players). These cards are placed (face up) next to the main board. The game now begins.

A game of Shakespeare is played over a series of 6 days. Each day is divided into 6 phases. Phase 4 (Dress rehearsal) is only played during days 4 and 6.

Each player takes their 5 cylinders in hand and secretly chooses a number of them, which they place in their closed hand. These cylinders correspond to the number of actions which the player will perform on that day. Wagering at least 1 cylinder is mandatory.

When all players have made their choice, they reach out their hands and simultaneously reveal the number of cylinders they have.

The players reveal their wagers. Red has wagered 2 cylinders, Green 5, while Blue and Yellow have both wagered 3. Red is therefore first. They take the first place and score 1 Prestige point.

During this phase, the players act in alternating order: whoever is placed first on the Order track performs one action, then whoever is placed second, and so on until all cylinders and Recruitment cards are used.

Note: it is possible for a player to end the turn alone (if they wagered more cylinders than their opponents).

On their turn, a player can either recruit (only once per day) or activate a Character by placing a cylinder on it.

A. Recruitment (only Once Per Day)

The player takes their Recruitment card and replaces one of the Character cards available next to the main board with it.

The Character card is then placed next to their individual board, either face up (meaning that they are hiring the character shown on the card), or face down (meaning that they're instead hiring an extra). This choice of side is final. The recruited character is immediately available for use.

Cost Of The Cards

All of the Character cards have a cost which ranges from 1 to 5 Pounds (except for the extras, which are free). However, this money will only have to be paid at the end of the game. As a consequence, the players spend no money to recruit up-front.

Reminder: to recruit, the player doesn't use a cylinder, only their Recruitment card. The recruitment is mandatory. However, if a player thinks that they will not have the means to pay at the end of the game, they can always recruit an extra.

The player takes one of the cylinders placed on their game board and places it on one of their empty Characters (meaning a Character without a cylinder or Rest token). They then perform actions depending on the icons present on the top right of the card. There are several types of cards:

All Character cards showing a costume space and an activation power are actors. Their function is to make the players progress on the three Acts on the main board, but some also have special powers.

In addition, all actors have a special power which is only used during dress rehearsals (see Phase 4). The color of the quill indicates on which Act the player can move:

Notes: the complete list of actors is presented on the reference sheet. The extras have no effect outside of the dress rehearsals (phase 4) and are not activated using cylinders.

A player who moves on one of the Acts and reaches a space occupied by another player places their disc on top of that player's disc. Thus, the first player who reached the space is the one on the bottom of the pile.

It is possible that a player can be forced to move backwards on a track (see Phase 3). If the player who moves back reaches a space occupied by another player's disc, they again place themselves on the top of that pile.

As soon as a player activates an actor with a cylinder for the first time each day, they place their disc on the first available space on the Initiative track.

There are three types of craftsmen: costume mistresses, set dressers, and handymen. The craftsmen are identified by a Craftsmen symbol at the bottom right of the card.

Important: If some players did not activated an actor, they are placed on the Initiative track after the players who did, in the order of their places on the Order track.

Once all of the players have placed their cylinders and recruited, each player in the turn's order, checks the ambiance of their troupe.

There are still two purple set elements left. All players thus drop their ambiance by two spaces. Blue therefore ends up on the "1 Pound" A and gains 1 Pound.

Finally, they bring their ambiance token back to the starting space B. The phase is over.

Note: this phase is only played on days 4 and 6.

Two dress rehearsals take place during the game. On day 4 (the "initial dress rehearsal") and on day 6 (the "final dress rehearsal"). During these rehearsals, the actors and extras which have a complete costume (3 discs) will benefit from their costume's power, which will allow players to advance the various Acts. Finally, the Acts are scored.

On day 4, Red performs his dress rehearsal last (they are fourth on the Initiative track) From among their character cards, Lady Macbeth, Hamlet, and an Extra each have a complete costume. They thus take part in the dress rehearsal.

The costumes of the Author and Falstaff aren't complete, and so they do not take part in the dress rehearsal. Red progresses on each of the three acts thanks to Lady Macbeth A. The Extra gives them a white quill and they choose to use it to progress on the yellow track B. Finally, they gain 1 Prestige point thanks to Hamlet C.

Note: on day 6, there is no maintenance phase.

The unrecruited Character cards are discarded and the players recover their Recruitment cards. Two cards more than the number of players (6 with 4 players, 5 with 3 players, and 4 with 2 players) are drawn and placed next to the main board. If there are not enough cards left, the discarded cards are shuffled to form a new deck.

The unclaimed costume and set dressing elements are discarded. New elements of each type (12 with 4 players, 9 with 3 players, and 6 with 2 players) are drawn from the bags and placed on the main board.

Note: the players can, at any time, check the discard pile for the costume and set dressing elements. Using their Game Reference, they can therefore determine the elements which yet remain to be drawn from the bag.

The Day token is moved forward one space.

Note: on day 6, there is no maintenance phase.

Simultaneously (without checking what their opponents are doing), the players must now block all the characters they've activated except for one.

They thus take as many Rest tokens as the number of cylinders used on this turn minus one, and place these tokens on the activated characters of their choice (it is impossible to block a character which has not been activated on that turn).

These characters are resting and will not be able to be activated on the following turn. The Rest tokens will be removed at the beginning of the next rest phase. Once a player has performed their blocking, they recover their cylinders.

Note: The block only concerns the Characters which have been activated. This way, if a player had wagered 5 but only used 4 cylinders, they only block 3 characters. As Assistants and Extras cannot be activated, no Rest tokens can be placed on them.

On this turn, Green used 5 cylinders. They thus take their 4 Rest tokens and block the Queen, Falstaff, the Author, and their Set Dresser. Their Jeweler will therefore be available during the next day. They then recover their cylinders. None of the blocked characters may be activated on the next turn.

The game ends after the dress rehearsal (phase 4) of the sixth day.

The player with the most Prestige points wins the game.

In case of a tie, the player with the most Pounds left over among the tied players wins the game. 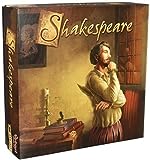