What is a Set

The Rule: A SET is 3 dice in which each individual feature is all the same OR all different on all 3 dice.


Quick Check: An easy way to make sure you have a SET is if you can answer YES to ALL 3 questions below. If any one of these questions is answered no... then it is not a set.

Q1: Is the COLOR on all 3 dice either all the same OR all different?

Q2: Is the SYMBOL on all 3 dice either all the same OR all different?

Q3: Is the NUMBER of symbols on all 3 dice either all the same OR all different?

The following examples are not SETs. If you can say that 2 of the 3 dice are the same and 1 is different in any one feature, then it is not a SET.

REMEMBER THE RULE that each feature, looked at individually, has to be all the same OR all different on all 3 of the dice.

Now take a minute to try to make SETs. For every two dice there is a third die that will make a SET.

To score the most points. Score points by making SETs with your dice and those already on the board. The more SETs you make, the more points you score!


How Dice Can Be Played

SETs can only be made horizontally or vertically, not diagonally or around corners. Dice can be placed anywhere on the board so long as they make a SET in at least one direction and use at least one previously played die as part of the SET.

A die can be placed next to or between previously played dice where it doesn't make a SET in all directions so long as it does make a SET in at least one direction. If the die makes more than one SET with its placement, all new SETs are counted for points.

The yellow die is added to the black dice on the board creating 2 SETs each worth 3 points, scoring 6 points for the first die played.

The player then adds a second yellow die creating another SET worth 3 more points. Their score is now 9 points for the first 2 dice played.

The player then adds the third and final die for that turn, creating yet another SET worth 3 more points. Total score for that turn is 12 points.

Also notice the two arrows pointing to the 2 purple ovals. The placement of this die does not make a SET in both directions. This placement is fine, because there is a SET made in at least one direction (horizontally).

Also, please notice that this SET is all different in number and that it is okay that dice are not placed in numerical order.

Wild: A Wild die can be used as any die needed to complete a SET. When a Wild is played, the player must state what features the Wild represents and its features cannot be changed. Any number of Wild dice can be used during a turn or in a SET.


Wild Replacement: At the beginning of any player's turn any Wild on the board can be replaced with one of the player's dice so long as it has the exact features that were originally chosen for the Wild.

No points are given for replacing the Wild, nor does it count as 1 of the 3 dice played by that player. The player does NOT automatically get to use the Wild side of the die that they removed from the board, they must roll it prior to continuing their turn.

The die can be played during the same turn or saved for a later turn.

A Wild can be used in place of any die needed to complete a SET. Once a Wild has been played, its features cannot be changed.

At the beginning of any player's turn, the Wild can be replaced with a die that has the same features.


Bonus Squares: Bonus squares are the numbered squares on the board. The first time a bonus square is used, the player gets to add the bonus points to their total points for that turn.

Bonus points can only be added ONE time, no matter how many SETs are made reusing the die on the bonus square.

Regular dice: 1 point is given for each die in a SET. If the same die makes more than one SET, then it is counted as 1 point in each different SET that it is used.

The game board is not used in this game.

Empty all 42 dice out of the bag at one time in the middle of the table. If some dice are stacked just roll them again. Call SETs as you see them. Take the 3 dice that make the SET and place them in front of you.

The first player to call SET gets to choose their dice first. There are no turns. Play continues until all dice are gone or no more SETs can be made. This ends round one.

Players arrange the SETs they found in front of them so others can check the SETs if desired. A WILD die can be used as any die to complete a SET. Each SET must contain 3 dice.

Place all the dice back in the bag, and then empty the bag again to start round 2. Play 5 rounds. If you tie, roll the leftover dice. The first person to see a SET wins.

The game board is not used in this game.

Each player takes 10 dice out of the bag. All players roll their 10 dice at the same time to start the play. If some dice are stacked just roll them again. The goal is to combine all your dice into a crossword-like grid made up of SETs. Each player can only make one grid, so all 10 dice have to connect together.


How Dice Can Be Played

SETs can only be made horizontally or vertically, not diagonally or around corners. Dice can be placed anywhere so long as they make a SET in at least one direction.

Example: Below is an example of what a completed grid would look like.

If you cannot make the original 10 dice connect into a grid, you can take 1 additional die from the bag. The new die must be rolled. If you are still stuck with no plays then you may choose another die from the bag (one at a time). Any additional dice must be included in the final grid or they will be counted against you.

Each player can rearrange his/her own dice as often as desired, but no die can be rerolled. All dice, including any additional dice, must connect to your grid. The first player to use all their dice making SETs in a crossword-like grid wins.

If you are playing with more than 2 players the extra dice in the bag will deplete quickly. Once it is empty, players may place their dice (forming SETs) on other player's grids in order to utilize all of their dice. They cannot rearrange other players' grids or use their dice in combination with other players' unused dice.

The first player to use all of their dice wins. This is the only player to score points. Their score will be equal to the total number of dice the other players have left unused. Play 3 rounds. The player with the most points at the end of 3 rounds wins. 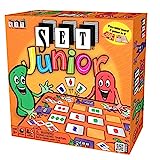 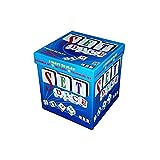